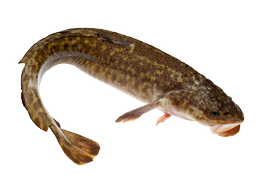 An ugly looking fish with an elongated body ending in what looks like a tail, and a barbel similar to that of a cod. Its back is dark and the sides spotted. Burbot is seen as a delicacy by many, but it’s still hard to find recipes other than old-fashioned classics.

The skin is dry, hard and slimy. Always skin burbot – or ask your fishmonger to do it – before cooking. The gallbladder must be removed.

In the past burbot was caught in the coldest season of the year by clubbing it over the head. When it was lying still close to the surface of icy lakes, you hit it with a club and then picked it up once it was stunned.

How to cook burbot

Burbot must be skinned and filleted before cooking. The flesh is white and firm. It tastes good and can be used in many ways.

Burbot tastes best at spawning time (and then you get the caviar too) which is December to February.

Burbot liver is said to be a delicacy but in some waters can contain high amounts of chemicals.

The flesh is firm enough for stir fries. Make sure the heat is high and put the fish in towards the end. Don’t be too violent with the spatula.

Stuffed burbot is a dish with a long history but the delicious, lean flesh deserves more modern and simpler treatment. Fry in batter and serve on a bed of risotto or spiced puy lentils.