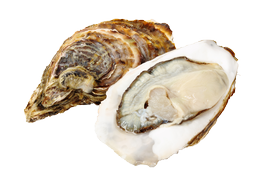 Oysters come in many versions and sizes and are often eaten out of their beautiful shells, raw or cooked. Many people think they are the best variation on mussels that the sea can produce. If you are a beginner at raw oysters, start with a smaller, milder sort. The French poetically call them “huitres papillon", butterfly oysters.

Oysters are bivalves, a kind of mollusk.

The oysters you buy should smell of the sea. Romantics say they smell of life. Fresh oysters can last a week on ice if kept under pressure so that the shells don’t open. But if you can, it’s best to buy oysters the day you are going to eat them, or the day before, max. Get them from a professional fishmonger and there’s every chance they’ll be happily alive at the perfect temperature.

One tip is to go for oysters grown as close to you as possible and which have been transported as short a distance as possible.

Oysters should be fresh and alive whether you intend to cook them or not. Ask your fishmonger about the freshness and quality and look for cup-shaped oysters with an evenly shaped shell.

If your fishmonger hasn’t packed the oysters under pressure in a container, you can store them in a saucepan covered with a damp tea towel in the fridge. (Mistreating them by putting them on ice can drown oysters – because they are made of salt water – or even cool them down so much that they die)

If your fishmonger has packed your oysters under pressure in a container, don’t open it until it’s time to open and eat them.

To make opening oysters an enjoyable experience, get yourself a strong knife that will do the job – and ideally a protective glove for the hand holding the oyster. You’ll find step-by-step instructions here:

How to cook oysters

Oysters are eaten alive – or cooked alive. The halves of the shell should be closed so tightly that you can’t prize them apart. If they don’t close when you tap them or poke them with a knife, throw the oyster away.

Sniff every opened oyster – it should smell fresh like the sea – before placing it on ice. The presentation (and the ice) are extremely important when serving oysters like this. Garnish with lemon and seaweed.

A proper shallot vinaigrette should boil for a few minutes before cooling off for serving.

Oysters can be grilled, oven baked, fried, cooked au gratin and boiled (but the question is whether they aren’t even better fresh and raw). Oysters au gratin or baked in the oven can be combined with all sorts of things. It’s a good idea if one of more of the ingredients adds some fat. Oysters on the grill open by themselves (flat side up!) and are good with ordinary melted – or flavored – butter.

Au naturelle in their shells, on a bed of ice, smelling of the sea, and a little seaweed. With lemon or with a light vinaigrette with finely chopped shallots.

There’s no problem eating farmed oysters. Harvesting them, if done properly, can even have a positive effect on eutrophication in the sea.