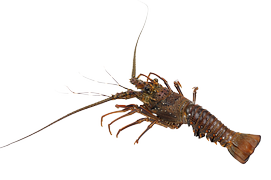 Also known as rock lobster. Like lobster but without the large scissor claws. As its name suggests, the shell is often spiky, pointy and sharp to make it a harder catch for predatory fish and squid.

Thse animals are nocturnal, live on the sea bed to depths of 150 meters and can become half a meter long and weigh 4 kg. They prefer warmer water than lobsters. The color varies depending on species and living conditions.

The claws don’t inspire as much respect as those of a lobster, but watch out for the spikes on the head and the sharp antennae.

How to cook spiny lobster

The meat is not as firm or highly flavored as lobster, but you can treat it in the same way.

It’s a waste not to make stock out of the shell. Roast it first to bring out more flavor. The sauce you make from the stock from spiny lobster or lobster is ideal for mild-tasting, poached fish.

Thermidor, halve the spiny lobster lengthwise and top with melted cheese. Spiny lobster should be cooked in advance – but not for long. One way of controlling how much it cooks (and making handling easier before topping with cheese) is to put the whole lobster into iced water immediately after boiling.

Spiny lobster are having a hard time of it in European waters but there are hopes that stocks will rise. We’ll be back when we know more.