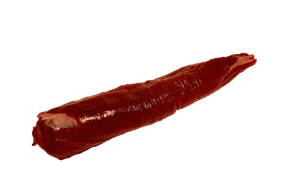 This is the tenderest cut of reindeer. With a bit of thought and a certain amount of care at the hob, your fillet will melt in the mouth. But keep an eye on it as it can quickly go dry and over-cooked. Aim for a maximum – absolute maximum – 57°C.

The meat of the fillet – unlike game joints – mustn’t be cooked at a low temperature because there’s a risk it will take on a sticky, doughy consistency. Too low a temperature can also bring out a flavor similar to liver, which many people unfortunately associate with game.

Reindeer has a relatively strong gamey flavor. Go for moose fillet if you prefer a slightly milder taste.

How to cook reindeer fillet

Fry the evenly cut fillet whole in a cast iron frying pan. Don’t let it lie in one place in the pan for too long. Turn it frequently so the heat works its way into the meat. Once it has browned slightly, turn off the heat and let the meat reach 55-60°C in the residual heat. Serve in slices cut across the fibers. Don’t over-complicate things. The meat has an amazing flavor all by itself. Salt, pepper and a sprig of thyme work wonders.

The basics when cooking reindeer fillet:

Let the fillet rest, otherwise the meat juices will run out all over the carving dish or your plates. Because the meat is lean, this will result in it being dry in the mouth.

Reindeer fillet with potato cakes and a red wine gravy.