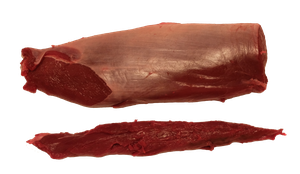 Fillets from larger roe deer are big enough to be cooked separately. Otherwise they usually form part of a saddle of venison. Fried quickly in plenty of butter, it will melt in the mouth of your appreciative dinner guests.

The meat of the fillet is extremely tender and – unlike game joints – mustn’t be cooked at a low temperature because there’s a risk it will take on a sticky, mushy consistency. Too low a temperature and slow cooking can also bring out a flavor similar to liver, which many people unfortunately associate with game.

How to cook roe venison fillet

This is a lovely little bit of meat. Let it be. You’ll go a long way with nothing but salt, pepper, butter and a cast iron frying pan. Or miss out the butter and char-grill. But whatever you do, don’t cook it for too long.

Roe venison fillet is perfect for char-grilling because it’s so small. Use a very hot cast iron frying pan with no fat and quickly give it a delicious, dry-seared surface all over. The middle of the meat should still be raw and juicy. Slice thinly, sprinkle with some salt flakes and serve.