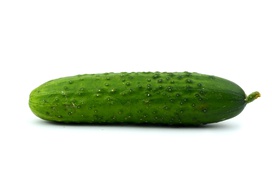 Despite its length, cucumber is a fruit. It comes in many different varieties, sizes and colors from common green cucumbers to smaller types specific to certain regions or used for salting and pickling.

The green cucumber that you find at the greengrocers can be up to half a meter long. The white version is called Asian cucumber and is a pickling cucumber which works well in a 1-2-3 solution.

If you’re lucky, you will find fresh, small cucumbers with a knotty peel. They need peeling, but can then be used as a “normal” cucumber. The difference is in the texture, which is perfect in the small cucumbers.

A cucumber should be springy. Feel them (but don’t squeeze them) to check that none of the ends have started to soften.

Cucumbers are – and should be – a mild vegetable that mainly consists of water. But you can get a bit more flavor for your money if you go for organic. Test and decide for yourself.

A crooked cucumber doesn’t have to be a worse cucumber.

It’s best to keep cucumbers in the original packaging. The material and the design will have been produced to keep the contents fresh for as long as possible.

If it doesn’t have any packaging, put the cucumber in a plastic bag or wrap it in clingfilm.

Cucumber largely consists of water, which means it doesn’t do well at high temperatures or when very cold. Keep it in a cold place and it will keep there for 3-5 days.

Distinguish between root vegetables and other vegetables: Green leaves and vegetables that grow above ground use up their water reserves and their nutrients much more quickly than root vegetables, which can be said to hibernate. Store them in different drawers of the fridge.

If it’s only the crispness you’re after, it’s a good idea to take the seeds out. That way the food won’t be as watery.

The peel of a cucumber is slightly bitter. If you’re lucky enough to have found one that’s got plenty of flavor, you might need to peel it.

Small, knotty cucumbers need peeling if you’re going to eat them fresh. If you’re pickling them, the peel will soften up in the process.

How to cook cucumber

Cucumber is mild, cool and a bit sweet. This is why this vegetable goes so well with slightly spicier ingredients and with Asian cuisine.

A beautiful organic cucumber can be eaten as it is, with a few drops of olive oil and a little sea salt. Otherwise it works well in a cucumber salad, tzatziki or Greek salad. Pickling your own cucumbers is another skill worth boasting about.

A spoonful of tzatziki lifts everything from a souvlaki kebab to wraps. This classic Greek dip consists of yoghurt with a fat content of 10%, grated cucumber, garlic, salt and pepper. Grate the cucumber a little in advance, salt it and drain slightly first and your tzatziki will have a creamier consistency.

Salted cucumber goes well with meatballs or a Sunday roast. Make a 1-2-3 solution and leave to cool. Wash cucumbers and thinly slice them. Salt and leave at room temperature for an hour or so. Squeeze out the water and pour the solution over the cucumber. Add something heavy, as in a press, and leave to stand for at least 6 hours. Serve without liquid but with dill.

Salted cucumber doesn’t need a press. Go for smaller, firmer cucumber and place in a 1-2-3 solution. Great with liver paté and bibimbap.

Drain pickled gherkins for a while as otherwise the liquid will run over the plate.

A spiral vegetable slicer lets your imagination run riot – but don’t let it take over from the actual flavors and textures in the food.

Greek tzatziki. Transform a cozy Friday night in to a meze night and ordinary kebabs to souvlaki.