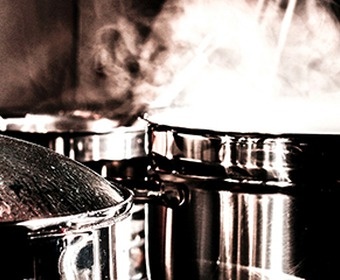 The muscles that carry most of the animals weight and that work the hardest during its lifetime – most often from the forepart of the animal – become strong, sinewy meat. This is the kind of meat that becomes tasty and tender when allowed to boil for a long time.

The toughest meat often comes from the animals forepart and contains generous amounts of connective tissue, collagen and marbling. It has to be cooked at a high temperature for a long time – or at a moderate temperature for an even longer time – to become tender. The chuck from beef is a popular cut, but there are plenty more suitable cuts.

What turns this kind of meat into a delicacy is to cook it for hours – boiling being the easiest method at hand – until the connective tissue is broken down, forming smooth and tasty gelatin. If you are uncertain about a cut (for example an anonymous but appetizing chunk of meat from your freezer), boil it. For a long time.

Time is taste.
– Per Renhed, F12 in Stockholm, The Restaurant in London, and more

Use generous amounts of water when putting meat to boil so that (1) the temperature does not go down and (2) the protein leakage is kept to a minimum. Protein is what forms the foam on the surface. It can give rise to bitter flavors and should be removed with care.

A wide and generous array of seasoning can be used to flavor meat that is boiled to the point of falling apart. Classic stews like curry, chili, boeuf bourguignon, gulasch, etc, come from every corner of the planet. Common to them all is that the meat sees to itself in the cauldron, what is important are the basics:

A tasty broth made from onion, garlic, spices and root vegetables. The veggie flavors will enhance the meat flavors.

If you want, the original vegetables that have been boiled soft can be removed and replaced with fresh ones at the end.

For the sake of taste, brown the meat at the start. Rolling it in flour first will give you a richer broth.

Toast and/or fry spices at the start.

Balance saltiness, sweetness and acidity. Taste as you go along – but make final adjustments at the very end.

Add herbs late in the cooking process, or essential oils will be lost through evaporation.

In boiling water the meat is heated up and cooked through contact heat. The temperature is relatively low, around the boiling point, but water is an effective carrier and transmitter of heat.

When steam rises from your pots it takes heat with it according to the same principles as when sweat or water on your skin cools down your body. To heat up water more effectively and to save energy, use a a lid.