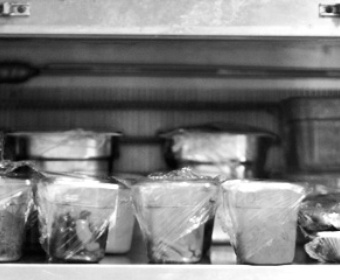 How to store meat

Getting the temperature right

The most common bacteria are only to be found on the surface of whole pieces and dies at a temperature of 64 ° C. To fry the meat all around not only provides taste, it also kills the bacteria on the surface. The reason why minced meat is more sensitive than other meat is that bacteria, that usually stays on the surface, is ground down inside the meat.

Lamb originates from young animals and is usually not tenderized, which means it should be consumed instantly.

Pork meat is a perishable commodity that should be consumed instantly. The reason pork is more sensitive than other red meat is because of the low content of fat in the meat.

Preferably, minced meat should be cooked the same day as it has been ground. Fry the mince before you freeze it to preserve more taste and texture.

Raw meat should never be in contact with food that is ready to be eaten. Carefully separate the two categories, using trays and plates to avoid cross contamination.

Oxygen is to blame for any decline in quality when you store foodstuffs for longer periods in the refrigerator or freezer. A marinade or a thin layer of olive oil protects the meat so that it keeps a little longer. Any layer of fat also protects the meat.

Refrigerated fresh meat, about to be prepared, performs best if it is not covered with plastic. Instead, use a clean kitchen towel. It doesn’t matter if the surface of the meat dries – it disappears when you cook it.

Professional kitchens maintain rigorous hygiene and use equipment to vacuum pack most items. Similar equipment is also available for domestic kitchens, but in a small scale kitchen it can suffice to store unopened packages for as long as possible and press out as much air as possible when you freeze meat. Always store vacuum-packed meat in the refrigerator or in the freezer. Vacuum-packed meat can be stored in the refrigerator for several weeks.

Meat that has been cooked at a temperature high enough to kill any bacteria is durable as long as it is kept in a vacuum and unopened package.

"Unpack meat well in advance of preparation, so it has time to dry on the surface."
– Per Renhed, formerly F12, The Restaurant, among others

The art of freezing meet

The art of thawing meat

Meat releases less liquid if it thaws slowly. Thawed meat will not last as long as fresh meat.

The most sensitive temperature range for all food is between 41°C and 57°C and that is why heating or cooling food should be a quick process. But what you have boiled in a pot under a lid can be considered as sterile – as long as you haven’t been there with your fingers, dirty tools or raw ingredients (fresh herbs, for example). In other words, it will stay good. You can turn off the stove with the pot on it and let it stand until the next day. Boil again before serving.

Never prod the food with your fingers or touch it with unwashed tools if it is to be stored.

Confit, a French word, is one of the oldest ways to conserve food, often cooking meat like duck, goose or pork in its own fat before storing in a container. Because bacteria cannot survive in dense fat, the confit technique has proven an excellent way to store food without keeping it cold.

In many countries, consumers have an unnatural anxiety – sometimes bordering on the verge of hysteria – about the expiry date on food packaging, which is mainly the result of insecurity and lack of knowledge. The date on the package is merely a recommendation and is affected by temperature, storage, the quality of the raw material, etc. Learn to use – and trust – your nose.

Pathogens in food can be mold fungus, virus, parasites and bacteria. The most common forms of biological contamination are harmful bacteria, which are responsible for about 95 percentage of all food borne diseases. Microorganisms are everywhere, but only about 1 percent of them are harmful to people – and different people are susceptible to different things.

Pathogens generally thrive in temperatures ranging between 5°C and 57°C. The meat that you are cooking should not stay in this zone for more than 4 hours in total. Most pathogens die in temperatures above 57°C. Cold does not kill pathogens, but in food that is kept below 5°C they fully or partially cease to multiply (but, of course, any existing poison can remain).

Pathogens can travel when an infected surface or raw material comes into contact with another one. The best defense is excellent hygiene. Some of the pathogens you are fighting: