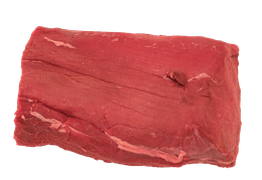 This is a fine, tender cut of meat from the back of a moose that’s similar to beef sirloin. But the meat of a moose, which lives in the wild, has coarser fibers. Game meat has a bit more attitude.

Sirloin is an unusually lean cut from an already lean animal. It’s important not to overcook it.

How to cook moose sirloin

Fry the evenly cut fillet whole in a cast iron frying pan. Don’t let it lie in one place in the pan for too long. Turn it frequently so the heat works its way into the meat. If you burn the surface, it will be even harder for the heat to reach into the middle.

Once it has browned slightly, turn off the heat and let the meat cook in the residual heat. Serve in slices cut across the fibers. A few sprigs of thyme in the pan are the perfect accompaniment to this delicious cut.

The tenderest cuts of moose – loin and sirloin – taste great char-grilled. This keeps the centre raw and juicy. Here’s how: