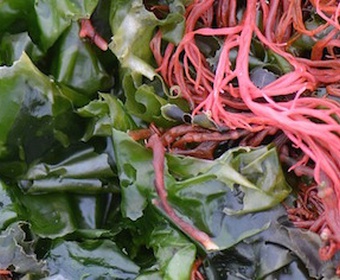 It’s sometimes called “the new kale”. At Professional Secrets we were intrigued and headed to the internet to find out more about this ingredient. But it didn’t really help. There are many voices hailing algae as the most beneficial thing the human race has ever seen, but almost none telling us how we go about transforming them into food we might want to serve our guests. So we decided to do it ourselves:

Although you might not have encountered algae in your food before, they do have a flavor that most of us find pleasant. It’s the kind of saltiness and umami from fish combined with the freshness and greenness (yes we’re aware greenness isn’t a flavor, but perhaps it ought to be) of green-leaved veg.

The roots of “umami”

Asian cuisine has long recognized the superpowers of algae. For centuries Japanese chefs have been fine-tuning their dishes – the basic stock known as dashi for example – with types of seaweed such as nori, kombu and wakame. All of them contain glutamic acid, a relative of the flavor enhancer monosodium glutamate (much discussed in Europe but not very much in Asia).

It was through algae that the Japanese discovered and launched the fifth flavor "umami” . If your food was a piece of music, you could say that seaweed is the bass notes. According to Wikipedia, umami roughly means “good fresh flavor”.

Seaweed from colder seas is apparently a bit milder in flavor than Asian varieties.

Maybe the simplest place to start is to crumble dried seaweed into practically everything, e.g. a butter, as a flavor enhancer. Make a butter flavored and colored with algae to serve with fish.

You can add algae to bread and pasta doughs and other doughs to add new colors and increase nutrients.

Long, thin, fresh seaweed goes well with spaghetti. Just add it to the boiling water. It adds a subtle flavor of the sea to your dish. Algae aren’t as salty as the sea itself, but they are full of sea flavors.

One step at a time

Algae in food can take a bit of getting used to, for two reasons: The first is that our Western stomachs aren’t calibrated for digesting vast quantities of seaweed. As we know, humans weren’t designed to eat green leaves as their main source of nutrition. It is claimed that Japanese people, after centuries of algae in their diet, are better adapted to coping with this food…

The second reason is the taste. Algae contain fantastic flavors that enrich your food, but you can have too much of a good thing. What algae have in common with brassicas is that the contain sulphur compounds. That’s what gives them the special flavors that not everyone appreciates. So do what you would do with brassicas: Don’t hold back on spices, spice up the dressing, the wok sauce, the stew, or whatever it is you are cooking.

Start by using algae as a spice. Experiment, and you’ll quickly find the right level.

Which algae with what?

Seaweed doesn’t necessarily have to only be included in dishes that are linked to the sea. In a dried form, the flavors are so deep that they can give new, broader dimensions to a tomato sauce or even a meat stew.

For non-meat-eaters, seaweed can help to make a vegetable stew more filling, for example. So that the flavors don’t get lost amid all the other ingredients, it’s a good idea to crumble algae in the minute before serving your guests.

Most ingredients from the sea work well with eggs, as does seaweed. The thickness of the egg beds in with the slightly sharp seaweed flavor.

Even desserts can get a lift. A little seaweed draws out the salt and umami and lifts even more flavor than sugar can do on its own. Try it with a fruit pie, for example. See what happens.

A bit about nutrients

There are many varieties of seaweed – over 600 species in the North Atlantic alone. To simplify things we can divide them into green, red and brown algae. Most of them contain plenty of vitamins, iodine, calcium and other minerals.

Nothing but plusses with algae

Algae are among the fastest growing plants in the world and bring balance to the water in which they grow, making them a good environmental choice. They are packed with vitamins, minerals and fibers, making them a good choice for your health. And last but at least: Handled right, they can take your cooking to new heights.

A bit of botany

The name algae refers to plants that live under the water. They can be everything from single celled plankton (microalgae) to seaweed (macroalgae) which create whole fields and forests under the surface of the sea.

Really, the two aren’t very closely related: Algae reproduce themselves through spores. Seaweed has a different lifecycle and produces flowers, fruits and seeds, with roots roughly like plants on land. One type attaches to and thrives on hard surfaces.

Most algae contain green chlorophyll and draw energy from the rays of the sun. Some algae contain other colors and substances which have the same function. Because they depend on the sun, algae can’t grow at extreme depths. Seaweed such as bladderwrack keeps itself floating on the surface with the help of bladders, as its name suggests, to make sure it is always in contact with sunlight.

Seaweed is one of the most common forms of algae and mainly grows near the coast.

The history of algae

It’s thought that the Vikings taught the population in what is now the UK to eat seaweed. It was baked into bread. Even today the people of Wales eat “laver bread”, a cooked batter of seaweed spread on bread.

The Icelanders retained the tradition of eating seaweed for a long time, often the kind known as dulse. They used it to add nutrients and flavor to soup, porridge, bread and butter.

It’s hard to understand why many of us have lost the habit of eating seaweed. In poorer societies seaweed can account for a high proportion of nutrients when other food is in short supply. One good guess is that it all comes down to status.

If you pick algae yourself:

No algae is poisonous to people, but if you’re picking it yourself, you might happen to find varieties that don’t taste that good.