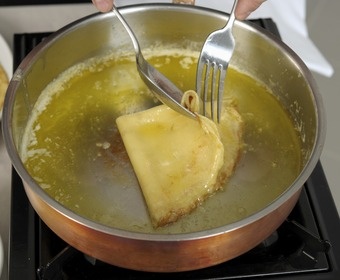 Desserts don’t get more French than crêpes Suzette. The French equivalent of pancakes are a bit thinner and more elegant than the American version. In this classic dessert, the suffix ”Suzette” means that the crêpes are caramelized and smell of orange, thanks to grated orange zest and alcohol with citrus notes. And butter.

No-one knows for sure, but the most reliable rumor says she was a young lady whose family spent a lot of time with the Prince of Wales in the 1890s. The same rumor says she was so sweet that the Hôtel de Paris in Monte Carlo named a dessert after her. History does not relate where the alcohol comes in.

The alcohol originally used for crêpes Suzette was the citrus liqueur Curaçao. Curaçao was derived from a special kind of Seville orange that grows on the West Indian island that gave the liqueur its name. These days the flavor and the flames are often brought about using Grand Marnier, Cointreau or brandy.

What kinds of alcohol work for flambéing?

In principle, you can flambé using any alcohol with any flavor. But. If you want it to catch light and burn, the alcohol content needs to be about 40% and the alcohol has to be heated to about 50ºC/122°F. If you flambé using alcohol that isn’t as strong, you will need to help it along with a little 40% proof (flavorless if you don’t want to affect the aromas).

As stated, for crêpes Suzette something with an orange flavor is traditional.

While flambéing adds a smoked note to the flavor, it’s mainly done because it looks extremely impressive. So, make sure you’ve got everyone gathered around the crêpe pan before you set it on fire. Coming out of the kitchen to tell everyone that you’ve flambéed the crêpes is a bit like coming out to say that you’ve uncorked the champagne all by yourself but there’s a bit left over.

Don’t flambé under the fan

If you’re flambéing on the hob, remember to turn the fan off first. Otherwise the flames can be sucked into the fan and set light to the grease that gets trapped up there. If you’ve got friends with rampant curls, it might be an idea to tell them to stand back as well. The smell of burnt hair is a bit of an appetite killer.

There are recipes for crêpes Suzette without alcohol but if you don’t use the alcohol, you can’t flambé them. If you’re not going to flambé them, you lose the burned aspect that makes the crêpes so exciting. Most of the alcohol evaporates during cooking and flambéing but if you don’t want alcohol in your dessert, there are lots of other desserts you could make instead. Chocolate mousse or crème brûlée, for example.

First make the thin pancakes, the crêpes. Don’t forget to leave the batter to cool for at least half an hour. Then make a butter sauce with sugar and orange zest. The crêpes are warmed up again when coated in the sauce. Fold them up and place each crêpe on a heat-proof plate, or do this bit in an attractive sauteuse. Sprinkle with sugar, drizzle with the alcohol and set it alight. This will increase the temperature of the dessert too, in more ways than one. Once the flames have died down, it’s time to serve.

Crêpes in general can be enjoyed hot or cold. But crêpes Suzette should be served hot, newly browned and retaining all their buttery, orange and alcoholic goodness. If you’re making this glamorous a dessert, it’s totally legitimate to take control. All eyes on the chef!

Everything you can do in a restaurant can be done at home.
– Kin Tsui, Wäst39

Flambéing is the main thing when serving crêpes Suzette. In French restaurants, it’s traditional for the head chef to do it at the table so none of the guests miss the spectacle. But it’s worth decorating your crêpes with some thin strips of orange zest at the last minute. And vanilla ice cream goes well with them. Take it out in good time so you can scoop a soft, delicious serving to accompany the dessert.