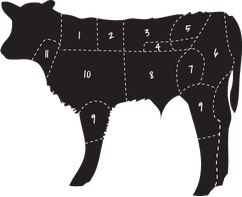 The advantage with veal is that almost all pieces of the animal are tender and easy to cook. The muscling and bones are younger - and very tasty. The disadvantage is that you may need to pay quite a lot of money for not so much flavor.

It is better to slightly undercook vela, overcooking will result in dry and dull meat.

Veal is leaner than beef and loses large quantities of liquid – juiciness – when overcooked.

Veal is generally tenderer than beef and therefore takes a shorter time to prepare. Some pieces such as the fillet are so tender that they risk truning "mushy" if they are tenderized.

The reason veal is more expensive is the high quality of the meat, the high cost of raising the calfs and, simply, because the animal is younger and therefore produces a smaller amount of meat.

Cuts from a calf follow the same principles as fully-grown animals, with the only difference being that each part of the animal is smaller – with less developed muscles as a consequence – and the bones have a larger amount of soft cartilage.