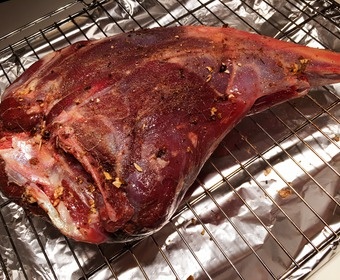 In a professional kitchen everything comes down to planning. Planning ahead and careful preparation, whether you’re cooking game or farmed meat, are the key to great deeds in the kitchen.

Clean away any traces remaining from the hunt

Always be careful about hygiene. Your implements and your hands must be kept clean throughout the cooking process. If you find any traces from the hunt in your meat, it’s important to clean them up.

Defrost at the right speed

Most people would agree that all meat, whatever its age, is better for defrosting slowly. That way the meat juices don’t disappear as quickly. KC Wallberg, award-winning chef, game specialist and the man in charge at Gubbhyllan at Skansen in Stockholm, claims, however, that meat is best if defrosted quickly under running water. What we’d say is try it and see.

Meat should be defrosted as quickly as possible. With friction, in a bag under running water.
– KC Wallberg, Gubbhyllan at Skansen, Stockholm

Take the meat out of the fridge in good time before cooking. Game meat is easily shocked if you expose the cold protein to high temperatures. The meat will shrink together, the liquid will be squeezed out and what you’ll be serving your guests is a dry ball.

Salt game ahead of time

Always salt your meat before cooking it. Pat salt round the entire cut and leave it to rest for an hour to give it time to penetrate in. The drying effect of the salt is minimal compared with the water that will evaporate during cooking.

Salt is the strongest binding agent in all kinds of meatballs. Salt game mince for at least an hour before making your mixture, ideally the day before. The mincemeat binds liquid, which produces a better consistency. That way, you won’t need egg or flour to get your game meatballs or burgers to stick together.

Cooking game is largely about trying to retain its juiciness. This is why it’s common to cook larger cuts whole and carve individual portions once they are cooked and after the meat has had time to rest. Estimate 120 to 150 g per person.

Game usually has a stronger flavor than meat from domestic animals. This means your guests will be happy with smaller portions. (But keep a bit of a margin as it makes the cooking less stressful.)

Game is packed with flavor and character. The easiest cooking method and the simplest accessories are often the right ones. Juniper and mysterious marinades are all well and good, but you can get a long way with salt and freshly ground black pepper.

Look after the fat

Fat conveys flavor – and is in short supply in game meat. Be careful to keep in any fat during cooking. Guests can cut it off themselves on the plate.

In the past lean game meat was improved by adding fat, often bacon. Sometimes the meat was wrapped in a thin layer of bacon before cooking. Another method was to make small holes in the meat and push in pieces of lard. These methods are considered old-fashioned today. This is probably because we have got better at keeping down the temperature and the cooking time.

Game can easily be marinated overnight, preferably with ingredients that help the meat to become more tender (but some professionals think that salt and a salt solution are the only true marinade). Game meat is lean, but fat in the marinade won’t penetrate into the meat. On the other hand, it will burn if you’re intending to cook it on the grill.

If you ask modern game chefs, you’ll often be told that a marinade unfortunately neither adds much juiciness or flavor. Instead try making a good glaze, which you add during and after cooking. It might sound superficial, but it works.

Lightly curing a piece of game meat brings out the wild, spicy flavor and makes the meat come into its own. Mix 3 parts sugar to 2 parts coarse salt and pat it into the meat 1-2 hours before cooking. You don’t need to be exact, with sugar in the mix, the meat can’t be over-salted.

It’s a good idea to make stock from the bones and carcass. The flavor is often more fresh and elegant than that from fattier animals raised in captivity. If you want a slightly stronger flavor, you can add bones from domesticated animals to your stock.

Brown the bones before boiling them with lightly browned garlic, onion and root vegetables. Celery, carrots, thyme, bay leaves and juniper can bring out the right gamey flavors. Many professional cooks also add tomato purée for a deeper flavor. The stock should simmer for a long time. Add more water from time to time if needed. Strain the liquid and boil it down to the right strength.

3 x 3 x 3 centimeters is an ideal size for pieces of meat in a game stew. Smaller pieces (unless you’re slicing it thinly for sautéing) will be too small once they’re cooked.

If you are cutting thin strips for sautéing, use semi-frozen meat and only do it to use up a cut that isn’t particularly tender. It’s no secret that a sharp knife makes the job easier and more fun.

Game is really “just” meat. Here you can read more about preparing meat.