If you walk into a professional kitchen during service you will be struck by the intensive atmosphere, by how hectic it is, and by how fast everything is moving along. All tasks and all details are carried out simultaneously and everyone knows exactly what they have to do. How do they manage it? How is it all organized?

A pyramid of knowledge

As in all effective organizations, work has been broken down into parts and assigned to smaller units where every member knows his or her place and responsibility. This organizational structure is known as the “Brigade de cuisine”, the kitchen brigade, and you will find it almost everywhere in the world.

Almost all professional kitchens embrace this system, the only thing that varies from one workplace to another is the number of stations and chefs, depending on the size of the restaurant. The basic model looks like this: 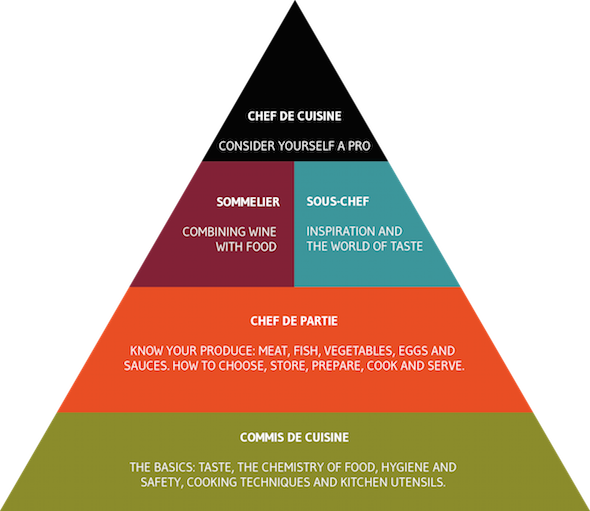 The meaning of “chef”

Originally, in French, a “chef” is simply someone who cooks professionally for others than him or her self. In international English the title has come to mean a cook with culinary ambitions, but the original meaning is “chief”, or “boss”, as in an office.

In the world of the kitchen brigade a Chef de Commis is a junior cook. He or she has – or is in – professional training, but is still considered an apprentice. It takes about four years to go from apprentice to the next level, Chef de Partie, or Line Cook. After that you continue climbing in knowledge, pay, and rank in this strongly hierarchical workplace.

In the old days family-owned inns used to do the job professional restaurants and hotels do to day. When the world and the way we travel developed and large hotels were built, it was also necessary to solve the problem of restaurants catering to maybe hundreds of guests. For the first time professional cooks were expected to cook classy food on a large scale – and to make a profit doing this. Organization and leadership was needed.

It was known for a fact that the army had the ability to organize large groups of people to carry out tricky tasks involving logistics and precision. The military chain of command was adopted as a role model and the kitchen brigade was born.

Every station had a responsibility and a group leader, or chef. The group leader, in turn, reports to a sous chef who reports to a kitchen chef, and so on. Georges Auguste Escoffier (1846 – 1935) is considered the father of this solution.

Climb the pyramid with PS

Here at Professional Secrets you will find knowledge, tips and tricks straight from the pros that will take your cooking to the next level. Our ambition is to help you climb the pyramid of knowledge – from “commis” to “chef” – in your own kitchen.

Because few things are as inspiring as cooking and eating great food! And because when more of us learn to respect food like knowledgeable chefs do, less of it will go to waste, less damage will be done to the environment, and farm animals will be treated better.