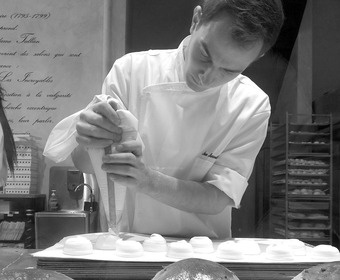 Advice from a pastry chef

A dessert can be the final element that rounds off a harmonious meal. After a heavy main course, a fresh sorbet or a well-made, little chocolate truffle goes down well. After a salad or soup, a decent slice of cheesecake or apple tart is perfect.

In a professional kitchen, you need to think ahead when planning a dessert. Because it’s going to land on the guests’ table as the last of all the courses – some of which will presumably be technically demanding – you often put desserts on the menu that can be made in advance and only need a final “touch” before serving.

A chef who makes crêpes Suzette at the table is all very well, but a master chef who’s thinking strategically will go for a crème brûlée made earlier in the day which will only take a few minutes with some sugar and a blow torch.

Dessert recipes must be followed

As non-professionals, we like being a bit spontaneous in the kitchen. But now we’re talking desserts, and desserts are mostly about chemistry. If your ambition is to produce a classic, more advanced dessert like chocolate mousse, a soufflé or crème brûlée, use a recipe at least the first ten to twenty times.

Many dessert recipes give the ingredients in precise numbers of grams or ounces. Weighing your ingredients is the best and easiest way to follow the recipe in detail – and when it comes to desserts, this is often what you have to do. Good scales are exact but don’t have to be expensive.

It is possible to make classic desserts without a pair of scales too. It’s just a slightly bigger risk.

When testing whether something is hot, dip your finger in down to the cuticle. Your fingertips aren’t reliable if you’ve been working in the kitchen a long time.

To make a dessert interesting, you need to work with clear textures and contrasts. Switch between creamy and crunchy, frozen and grilled, sweet and sour – or salty – crispy and smooth. If you have time, it’s fun to serve several desserts at once – a smooth, soft mousse, a crisp nougatine and an acidic fruit salad, for example.

The job of a dessert is to be distinct from the other courses, to give a different kind of experience in terms of flavor, appearance and texture. But our panel of dessert professionals are unanimous on one point – it’s important for desserts not to be too sweet. If everything is sweet, the plate is simply boring.

Desserts don’t have to be sweet. You can play on the sour side. Or on something else.
– Martin Isaksson, Chokladfabriken

Many of us have suffered traumatic experiences with lumpy gelatin. These days it isn’t usually difficult to get gelatin to dissolve elegantly in warm liquids, but if you want to be totally sure of avoiding lumps, you can start by melting it in a small amount of the liquid, so you’ve got a second chance with the rest.

Gelatin in the microwave

Sometimes you want to use gelatin in cooler liquids. Here you can melt it in the microwave. Soak, squeeze out and microwave for 15 seconds. If it hasn’t melted, give it another 15 seconds.

There are spontaneous desserts that you can throw together off the cuff. They usually taste great, but if you want to produce a really impressive dessert you need to put a bit of thought into it. Start early! Think through what you have got to do, make sure you’ve got everything you need and that you have a reliable recipe that you’ve already tried several times yourself. Do what the professionals do. Go for a dessert that can be made in advance.

Have something fabulous in the freezer

It sounds ridiculously organized, but it’s true. If you’ve got some pastry cases, some ice cream and a little rhubarb compote in the freezer, it will be easy to conjure up spontaneous puddings. And if you’re making mousse for four, you might as well make it for eight.

You can’t be in too much of a hurry. A lot of it can be in the freezer beforehand so you’re prepared.
– Martin Isaksson, Chokladfabriken

Use what you have at home

When deciding on a dessert, start with what you have at home. You’ll often find plenty of ideas in the pantry and the fridge. To build up a good stock of dessert ingredients, have a look at our well-stocked pantry list.

Your best dessert is the one you’re tired of

One tip: Your showstopper dessert that you’re starting to find rather boring is actually the best thing you can make for guests. Imagine you make the best crème brûlée in the world. Well why not make it when you’re really out to impress then? All those new, exciting ideas can be saved for a night of experimenting with close, and forgiving, friends.

If you want to level up, you need to practice.
– Christophe Buchet, Bleck

If you love blueberry pie, vary it by retaining the flavors but changing the format. One day, maybe it’s a vanilla panna cotta with blueberries sprinkled around it and a biscuit on the side. If you can’t decide which dessert you want to make, make several small ones on the same plate and give your guests a conversation topic deciding which tastes best.

A more pretentious cook would say “deconstruct the dessert”.

Get to know your oven

All ovens are different and when you’ve made the same recipe several times, you’ll know better than the person who created the recipe how it works in your particular oven. At that point it’s time to start taking the specified temperature with a pinch of salt. It’s about trial and error. You’re the professional in your own kitchen.

How long to whip cream for

Lots of us whip cream unnecessarily thoroughly. Pastry chefs whip cream very gently and stop long before it leaves a trail and forms clumps in the bowl. If it does end up too watery, despite your best efforts, put it in the fridge for a while and it will settle. Also, learn everything there is to learn about cream in desserts.

Appearance is far from everything but it’s a much more important parameter for desserts than in main courses. Give your ice cream, chocolate mousse or panna cotta a finishing touch with some sprinkles, chocolate flakes, toasted nuts or crisp cake crumbs. Read more about decoration ideas.