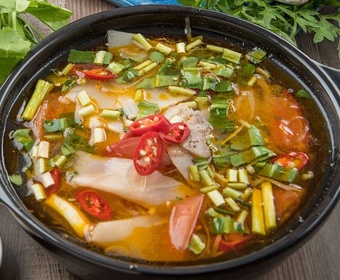 The secret of boiling fish is that you mustn’t let it boil. It should simmer/poach at a temperature just below boiling point. Fish chefs we’ve talked to recommend simmering in cooling water. Depending on the type of fish and the size of the pieces or the shellfish, the method is as follows:

• Bring a large amount of water to the boil. Too small an amount of water won’t be enough to heat up the cold fish. Suggestion: 3 liters of water for 500g fish, and one liter for every extra 250g fish.
• Put the fish or shellfish in the water. The water will stop boiling. When the water reaches boiling point again – when the first bubbles appear – turn down (or turn off) the heat source.
• For smaller pieces of fish and smaller shellfish, the residual heat is enough when you have turned off the heat source completely.
• Check with a sensitive thermometer with a thin probe.
• Shellfish are best if they stay in the liquid for at least a day.

You can’t do anything about fish that has boiled into mush. It’s better to under-boil it than over-boil it. That way you can always improve the result, or simply choose not to eat what is raw.

“Better to go for a low temperature and wait a bit longer.”
Peppe Elmqvist on the art of cooking fish

Poaching is a subtle way of boiling that is suitable for fish that is easily damaged. “Poche” is the French for pocket, like the English “pouch”, and was originally used to refer to eggs cooked in water without the shell, with the white acting as a “pocket” for the yolk. For fish it has come to mean that it is cooked in a small amount of simmering water, liquid, bouillon or wine.

White fish like cod and flatfish should be boiled in brine or fish stock. It’s a good idea to cook fatty, meaty fish such as salmon and mackerel in a flavored liquid. Cook the liquid for about 5 minutes before adding the fish. If you are going to eat the fish cold (cold poached) it should cool in the cooking liquid.

Cold poaching means that you simmer the fish carefully and then let it cool in its liquid. The fish is served cold. Especially fatty fish such as salmon and char make firm and attractive servings when cold poached.

If you are cooking your fish in water, it should have about the same salinity as the sea, 3.5% or about 1.5 tbsp salt per liter of water. “As salty as the sea”.

Salted cod should stand for at least 6 hours and a maximum of 2 days in a brine of salt, sugar, white pepper, spiced pepper and bay leaves. Here you should reduce the amount of salt in the liquid from 100 to 50 ml salt per liter of water. To remove a little of the saltiness, it must simmer in water without salt.

The art of boiling lobster

Langoustines and other delicate shellfish go flaky if the meat is exposed to heat for too long. When cooking langoustines, let the residual heat do the whole job. For a more even result, sort them by size for each batch. Put them in with the claws first and wait for the first bubbles – that’s when you turn off the heat.

Lake crayfish should be cooked in a 2.5% brine. If the crayfish are going to be eaten the same day, you need to increase the amounts of salt to improve the flavor. It’s best if the crayfish are able to sit for a few days in a normally salted brine.

Unlike more tender shellfish from the sea, mussels need to be cooked properly. The flesh should be cooked thoroughly so that all the healthy mussels have opened. Live mussels must be closed or close when you tap them.

• It’s a good idea to make the base in advance.
• Build your soup on a good stock.
• Always pick your fish based on color, consistency and shape. And based on the day’s catch.
• Use more expensive fish for something else.
• Flatfish are good for stock but don’t look attractive in a stew.
• Put the fish in just before serving and allow to simmer for a few minutes.
• Put any prawns, tuna and other ingredients that quickly cook dry in last of all.

“Put the tuna in at the end, as if it was prawns.”
Chef Stefan Eckert on fish soup

Cooking times vary according to thickness (round fish should be measured at their thickest point):

Shellfish – like fish – should always be cooked to a point that could be said to be equivalent to "medium rare" for meat. Start timing from when the liquid starts simmering again:

Damp air transfers heat more slowly and more gently than water and preserves flavors and nutrients. Steaming should be at 100°C to 120°C. Advanced steam ovens are a trend but you can steam fish with the help of a bit of aluminum foil over a saucepan or roasting tin. A bamboo steamer is the cheapest and the most attractive solution. Use a thermometer and steam too little rather than too much.