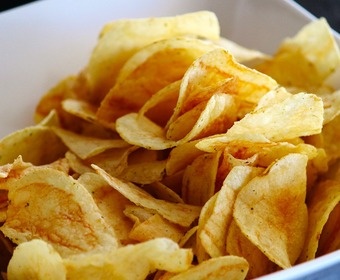 The taste of salt arises from sodium ions dissolved in water, for example from ordinary salt which consists of sodium chloride. Heavier metallic ions, such as potassium, are experienced as less salty.

Salt contains, among other substances, sodium and potassium which are both essential for regulating heart activity, blood concentration, and more. After perspiration it is not only important to drink water, the body also needs (small amounts of) salt.

Salt has an ability to turn on and off our capacity for sensing multi-dimensional flavors. The phenomenon is often – and carelessly – described as salt induced taste, but what actually occurs is that it awakens the taste receptors in the mouth.

Both salt and sugar (sweetness) are flavor enhancers and can be combined in the same dish. But one of them will dominate, it is not possible to keep adding more of the two substances without the flavors tending towards one or the other.

Chefs use much salt

A reason why the food you eat out tastes so good is that professional cooks apply generous amounts of salt. Health-minded critics argue that there is an unhealthy amount of salt being used, but if you want to avoid high blood pressure it is a better idea to stay clear of pre-prepared food than to avoid eating out.

The weight of salt

Salt in a recipe is more accurately provided by weight than by volume as – for example – finely ground salt has an entirely different density than salt flakes. An experienced cook determines the correct amount of salt by continuously tasting before serving.

Salt as a technique

If the salt is part of a cooking technique, such as when salting a fresh raw material or when pickling, you should use exactly the amount of salt stated in the recipe. Otherwise there is a risk that you will get the wrong effect, not just the wrong flavor.

The point with salt flakes that you apply to the plate just before serving, is to add a decorative sprinkle of saltiness and crunchiness, which in turn adds a little more surprise to every morsel. When cooking in a pot or pan you might as well use less expensive salt. Remember that coarse/kosher salt needs more liquid and more time to dissolve completely.

The sensation of salt in food is highly individual because different people have different setups of taste receptors in their mouths. For this physiological reason it is difficult to provide definitive advise about salt. A tip from the pros:

Use salt generously. But be careful; putting too much salt in the food cannot be undone. And be aware that other people may experience the amount of salt in the food in a different way than you do. Try using a little less and allow for your guests to add more salt if they want to.