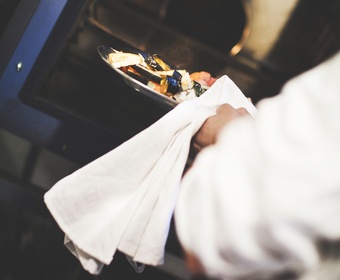 About the chef's side towel

In the hands of a professional chef, a top quality side towel (or cloth) is one of the most versatile and important tools in the kitchen. It is used for everything from drying your hands and grabbing hot pans, to covering greens and crushing ice...

An extremely vital kitchen tool!
– Per Renhed, former chef at The Restaurant, London, and sous chef at Restaurant F12 in Stockholm.

Professional chefs don’t want their towels patterned or colored. It should be easy to spot flecks and other stuff such as food bits, herbs and the like that stick to the towel. The weave should make the towel easy to hold and safe to use and it shouldn’t become ‘knotty’ after numerous washes.

Always have a pile of clean, dry side towels lying ready when you get going in the kitchen. In professional kitchens it’s not unusual to store them in the fridge so that they are in a hygienic, protected and easily accessible place.

The daily life of a side towel…

Your chef’s towel should not get wet (unless you are using a humid towel to, for example, cover chopped greens). If it does, it will transmit heat when you grasp something hot. The towel should be clean and dry and at your side regardless of where you are in the kitchen or what you are doing. Ideally, you should have it hanging from your waste so it’s within easy reach. Attach to your apron’s fastener, your belt or in the belt hanger.

A useful trick is to tie a knot at one corner of the towel so that it stays put at your waist – but is easy to release when you grab the towel with your hand.

It may look stylish having the towel draped over your shoulder as many TV chefs do. However, Per Renhed, once chef at The Restaurant in London, says he developed a bad posture and back problems by always having the side towel over his shoulder. Don’t do as Per did!

Your side towel has more uses than any other tool in the kitchen. Here are some of them:

You’ve washed your hands, of course, but they’ll constantly get wet as you prepare the food. In a professional kitchen, it’s a matter of honor not to wipe them dry on your apron…

Not the dishes, but the plates you’ll serve the food up on for your guests.

Your towel helps you get a firm, safe grip on everything, warm, cold, sharp or slippery.

For example, when you crack open a shellfish. And to protect your hands when opening oysters.

Experienced chefs ‘wrap’ the side towel around their hands so they get several layers of dry cotton between their fingers and the hot pot. Train your wrapping technique….

Fold the cloth a few times to ensure a hot pot can stand on a surface without burning it.

Place the cloth under the cutting board, mortar, bowl and so on. If required, you can dampen the towel slightly.

You should be as clean and attractive as your kitchen. Use the side towel to cover embarrassing flecks on your apron.

With several side towels handy, there’s no need to use paper towels that litter and can get into food when you are mopping up water, meat juices, fat and the like.

Before placing a ready rested bit of meat on the plate, place it for a couple of seconds on a double folded towel so that meat juice residues are absorbed.

Place a clean, dry towel over dough, ready made bread, meat, food plates and other stuff that needs protecting in an airy environment.

Slightly dampen a towel with cold water and place across vegetables that need to be kept fresh as well as over foodstuff that should not dry out when defrosting.

Don't throw away a used towel

Thin and heavily washed side towels are perfect as steaming towels, jar covers and to dry salads or wrap fresh meat in prior to cooking.  The cloth is also perfect to produce a ‘ballotine’ (a filled roll of meat that is served in slices).

Make a bag with the towel, fill with ice and bang against the table or bash with a heavy frying pan. You can also crack open nuts this way!

A clean side towel stops bleeding and works great as a bandage. Make an ice pack with the towel to cool bruises and burns.

Clean up with a towel that has been used for other jobs and is headed for the washing machine.