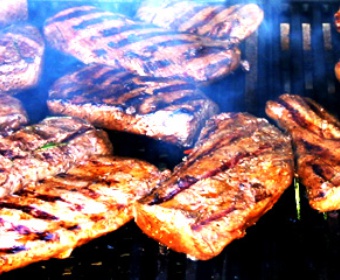 How to cook meat

The most important rule when you cook meat is: Use the right piece of the animal for the correct method of preparation. Some cuts are so tender that they only need to touch a frying pan, others must be cooked for hours. Neither is better than the other – both deliver a fantastic food experiences.

Tough and fat or lean and tender?

Muscles that have worked hard and long during the animals lifetime – often found on the foremost part of four-legged creatures – often cost less and contain large amounts of connective tissue, sinews and fat. It is the collagen in the connective tissue and the fat that gives the meat a smooth and wonderful texture. It brings out big flavors in meat that is allowed to cook for hours until the protein fibres are broken down and become tender.

Lean and tender cuts like tenderloin should be treated in the opposite manner. They contain a minimum of fat and connective tissue and must be handled with care so that they don't contract from sudden heat and form a dry ball of muscle fibers. An apporpriate cooking method must be short, gentle and controlled so that you can get exactly the temperature you are aiming for ( see Only a few degrees below).

Less exclusive cuts can undergo considerable changes in taste and character through hang tenderizing. This is a process that can affect the meat – and how it ought to be cooked – to a large extent

Use a meat thermometer

To achieve the correct temperature: Make sure to have similarly sized pieces, pre-fry the meat in the frying pan and then cook in the oven – with a thermometer. Let the meat rest prior to serving so that the heat and the juices even out. Keep in mind that the internal temperature keeps rising (4 percent of the oven temperature, as a benchmark) even after you have removed the meat from the oven.

Only a few degrees

Generally, tender cuts of meat that are cooked quickly are the most juicy. They usually taste best when between 45 and 65°C. What makes the meat “cook” is the high temperature that causes the proteins – the amino acids – to coagulate. It is the internal temperature that determines the juiciness of the meat, not the browning or the sealing of the surface.

The internal temperature in beef delivering, say, “medium-rare ”, varies from cook to cook, from restaurant to restaurant and from continent to continent. In Sweden, the correct temperature indicated to reach a medium-rare result is often (but not always) 55°C. In Australia, a more advanced meat country, 45°C is considered to equal medium-rare.

An attempt to sum up all rules in a chart could look like this:

According to the recommendations, pork should reach 70°C and poultry 72°C, but you achieve a more juicy result with both of these lean types of meat if you stop the cooking a bit beforehand and let the meat finish cooking in the after-heat.

If you are uncertain about a cut of meat – for example an anonymous but appetizing piece from the freezer – boil it.

There are a number of techniques and secrets that you need to be aware of in order to get a great result when cooking meat. Below you will find knowledge, tips and tricks from some outstanding chefs specilaized in meat:

How to marinate meat

How to season meat

How to fry meat

Meat in the oven

How to grill meat

What happens on a molecular level when you cook meat is that the protein fibers coagulate. The fibers attach to one another to form a solid mass that also contains water molecules. All protein coagulates at temperatures between 40°C and 60°C.

If the heat continues to rise above the point of coagulation, the proteins contracts more and more. The mass gets thicker and harder and the water is pressed out. The meat gets tough and rigid. The coagulation of proteins is an “irreversible” process, when it has started you cannot stop it.

On the contrary, what you can do is to continue to expose the proteins to high temperatures until they start to break apart. This is what happens during slow cooking. But here there are also differences: Fine pieces of the animal with a low content of fat and little connective tissue tends to have a grainy texture. On the other hand, less fine pieces of the animal tend to be soft and juicy, which gives the taste sensation one appreciates in a full-bodied stew. It depends on the higher content of fat, as well as on the gelatinization. Gelatin is mainly found in bone, connective tissue and skin and is released in high temperatures. They are transformed to liquid when heated and form a jelly again when they cool off, over and over again.

When you fry or grill meat, two things happen on the surface: Caramelization and the Maillard Reaction. Meat consists mainly of protein, but small quantities of sugar caramelize on the surface of the meat and makes it detach from the surface. The chemical process that is known as the Maillard Reaction takes place between the carbohydrates and the amino acids causing a brown color and an abundance of taste and fragrance nuances. If the meat in your frying pan releases so much liquid that it boils, the Maillard Reaction does not set in. Water boils at a 100°C, which is too low to create the fragrances and tastes that occurs when grilling and frying at temperatures above 120°C.