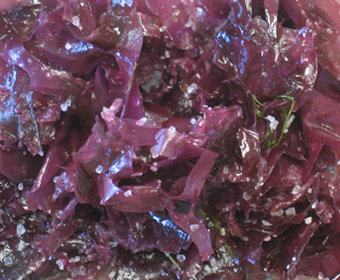 Fresh red algae can last about a week in the fridge. Several varieties can be bought dried in Asian supermarkets, in well-stocked supermarkets or online. Some can be used and eaten dry as they come, otherwise soak or simmer them in water before cooking them. This process adds a whole new character to the ingredients.

Estimate that dried algae will swell up to as much as ten times its weight.

This delicious red algae is often red-brown or brick red in color. The leaves are about 20 centimeters long. It’s popular in Japanese, Chinese and Korean cuisine and is on the verge of a breakthrough in Europe.

The stuff you’ll find in shops – or online – often comes from Iceland or the Faeroes. The first time you smell dulse, you probably won’t fall for it immediately, but give it a chance (think fish sauce, anchovies, blue cheeses and other things that taste great on your tongue…).

How to cook dulse

This red algae can be eaten raw or cooked. You can make it easy for yourself by serving it in salads and on sandwiches.

Some people say that dulse has a smoky flavor similar to bacon. It adds new, deeper dimensions to creamy rice dishes like risotto and paella.

Dulse is often dried to a powder with which you can add flavor and color to butter, soups, dips, doughs, stews, etc. In Iceland they eat it as it is, with butter. Dried dulse, with its subtle taste of the sea, also works as a snack to accompany drinks.

Try roasting it in a dry pan for an even more intense flavor and then crumble it over hummus and other dips. Or over the salty nuts.

Nori is an umbrella name for several species of red algae that grow in wide sheets. This is perhaps the best known version of algae worldwide, going by its Japanese name. Nori is pressed and roasted to form thin “paper” used to make “sushi rolls”, maki.

How to cook nori

The thin, roasted leaves are ready to be eaten as they are. They work well as snacks and/or as a decoration for various dishes. You can also crumble the dry leaves into yoghurt for a sour salad dressing or for a dip with a bit of depth to its flavor.

Marinate with nori. Try crumbling down the pressed, roasted leaves into your favorite marinade. The flavors that emerge often go well with white wine. Mustard – related to wasabi – goes well too.

Nori is also the traditional ingredient in “laver bread”, a nutritious Welsh “purée” of boiled and reduced seaweed that is seasoned and eaten on bread.

This attractive algae varies in color from a purplish red to yellow and is mainly used as a natural thickener. You’ve probably eaten it before, as it’s added to milk products, ice cream and mousses to stop them separating before they get to the shop. And it’s in sweets or that unrealistically red berry on top of your pudding.

After cooking, carrageen moss is easier to digest than most of the other algae. It consists of about 80% of a jelly-like substance and in the hands of a skilled (vegetarian) cook it can work as a thickening and binding ingredient instead of egg and flour.

Carrageen moss is also known by the name Irish moss and is common along the whole Atlantic coast. It has a good consistency with the right amount of bite and works in salads.