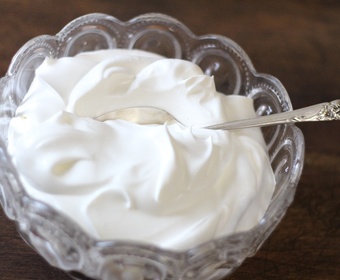 Cream is a superb ingredient in all cooking, not just in desserts. But in main courses, it’s mostly used as a silky-smooth flavor enhancer in sauces, soups and casseroles. In desserts, (whipped) cream plays a more varied role:

There’s no reason to buy cream with a fat content lower than 35% to 40%. The high content makes it last longer naturally and gives it the properties you want cream to have, like being able to whip it.

Remember that 40% fat cream is perfectly edible several days after its best-before date. Test it by smelling and tasting it.

Lumps of fat in cream

When cream is left to stand, the fat tends to gather at the top. This is because natural cream is an emulsion (a “forced” blend of fat, protein and water), not because the cream has gone sour.

Fatter the better in cooking

Cream with a higher fat content doesn’t curdle as easily and is therefore better even for main courses. If you’re afraid of fat in your food, use less of it.

The art of whipping cream

You need a fat content of at least 30% for whipped cream. However, anyone who has whipped cream more than once will know that sometimes it is easier than other times. Some professional tips:

To be honest, fresh cream in pastries is often fresher than butter cream or ganache. But you need extra stable cream for that. One trick is to add custard powder in the cream. You need about 3 tbsps custard powder to 500ml cream. Method:

Pastry chefs often use gelatin to extend the lifetime of cream on a cake, for example. One recipe:

Whipping cream without a whisk:

You need a bowl with a lid that is big enough for the cream plus a bit of air. Close the bowl and shake it as if you were making a cocktail. This is a good way of avoiding unnecessary washing up, or to whip cream in the middle of a picnic. And it comes with a free workout...

There are fundamentalists who think cream with sugar in is anathema, but the bitter truth is that a pinch of sugar or vanilla sugar makes cream taste even better.

Whipped cream can be mixed with a bit of crème fraîche for a sharp, fresh combination of sweet and sour (and fat). Excellent with freshly baked scones.

Whipped cream in the UK and US

If you’re following English recipes from both sides of the Atlantic, it can get confusing. A little guide:

Dividing cream into different types is more to do with marketing than cooking. You can sell twice as much cream if it has half the fat content, and you get more in-store exposure if you have several varieties on the shelf.

Cream with a low fat content – especially if it has a long shelf-life – will contain things like carrageenan, stabilizers, pectin, monoglycerides and diglycerides of fatty acids, modified starch and cellulose.

Homogenization is used to prevent the fat in the cream forming lumps. This technique breaks up the droplets of fat in the cream, making them even smaller. This is especially used for cream with a low fat content. Proper cream copes on its own and is harder to whip if it is homogenized.

Carrageenan is a substance that forms a mesh of thin gel which makes it harder for the fat droplets in the cream to clump together. It also goes by the name E407 and is made from red algae.

Cream is a natural emulsion. At a microscopic level it consists of droplets of milk fat in a state of suspension in water. There are proteins on the surface of the droplets that act as an emulsifier so that the fat and water can mix.

Mechanical beating breaks up the droplets of fat. And this removes their surface layer of proteins, so the droplets clump together and take on a new structure that encloses the water and air from the beating process. The more the cream is beaten, the more this happens.

If you beat too quickly – e.g. in a carbonation system – the foam will soon collapse again because the stabilized network of fat hasn’t been created mechanically.

The fat in the cream must be as solid as possible when whipping. At higher temperatures there is a risk that part of the fat will clump together without forming stabilizing layers around the air in the foam. In practice particles of butter will form in the cream. (If it’s butter you want, it’s better to beat warm cream...)