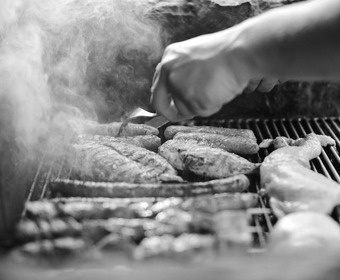 The difference between bbq and grill

Grill and barbeque are not the same thing. The former is something holidaymakers do in their back garden as soon as the weather permits, the second is a method, an apparatus, a verb and – at least in the USA – a lifestyle.

Grilling mainly takes place over direct heat, that is to say on a grate situated over red hot coals. Many grills have a cover so that you can enclose the heat, but most of the action is with the grill open.

The food is cooked in a matter of minutes by being subjected to high heat, often in excess of 200°C/400°F depending on what part of the grill is used. The high heat and speed of cooking makes a grill suitable for tender, red meat, lamb chops and pork chops, hamburgers, sausages, fish, shellfish, and vegetables.

Barbecue (it can be spelt both ways), however, is about cooking meat – because it is often a question of meat – for a long time with low heat and in a closed chamber. This method gives “lesser” cuts the time to develop a smooth and tender texture, while at the same time giving smoke and spices time to flavor the meat. For an American style barbeque, marinades and smoke and glaze are of essence.

The red hot embers are situated in another chamber and the food is cooked by smoke and indirect heat. The temperature at which the meat is actually being cooked can be 100°C/212°F, or even lower. The process might take hours.

The purpose of wood in a barbeque is to give flavor, which makes it important to use the right kind. Hickory is an American favorite, but you can also use apple, pecan, mesquite, maple, cherry, grape vine…

For those of us accustomed to grilling, the above differences can explain a lot regarding the use of ”glaze”. Many of us have discovered the hard way that that you can’t brush a sugary liquid on a cut of meat in a traditional grill. It only takes seconds for the sugar to burn and form a layer of unappetizing charcoal on the food. But using generous amounts of glaze works wonderfully in a barbeque with indirect and (relatively) low heat.

Try bbq on the grill

If you are fond of expensive equipment there is no limit to how much you can spend on your barbeque. But if you just want to test the principles and techniques regarding this mode of cooking you can get quite far with proper kitchen tools and the right knowledge: