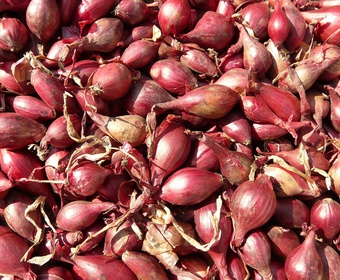 There isn’t a cuisine in the world that doesn’t use onions in some way, shape or form. When we’re talking about knowing our onions, we’re looking at all the members of the onion family, and that includes spring onions and garlic... It’s surprising we use onions so much really because the strong oils and aromas in onions are in fact chemical warning signals that are there to make sure that we and other animals don’t eat them. This is one explanation why onions – in most cases – benefit from some form of cooking or preparation.

Raw onion isn’t a plus on a date night.
– Joel Aronsson, Fäviken, Krakas, and other restaurants

The stalk is part of the onion too

Onions are more than the bulb that spends the winter under the soil. The green part that grows above the ground is onion too, and tastes like it. The fact that some parts of some onions are thrown away instead of ending up in the dinner, is nothing other than a waste of a great ingredient.

The basics of home cooking

Much of traditional home cooking is built around onions. They’ve got plenty of flavor, they’re juicy and nutritious and, like root vegetables, can be stored through long winters.

Onions are the basis of everything.
– Per Renhed, F12, The Restaurant, and others

There are over 700 types of onion. The farmed type originated in Central Asia about 3,000 years ago. In ancient Egypt onions were a symbol of eternal life and in medieval Europe the onion was considered to be both a food and a medicine.

The Spanish conquistadors spread the yellow onion to America – which already had local version of onion. It’s no coincidence that onion in some form is a fundamental building block in the kitchen.

This vegetable is rich in antioxidants. It lowers cholesterol and helps to keep blood sugar at a healthy level. Research even shows that it can prevent some forms of cancer – apparently due to the way the liver deals with sulphur compounds.