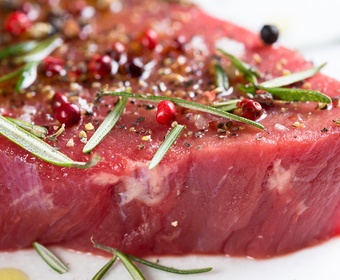 How to marinate meat

The best time to marinate meat is during the 1 to 2 hours that you keep it outside the fridge before cooking.Dry marinades, or "rubs", can be kneeded into the meat a day or two before cooking.

Salt is the easiest and the most effective of all marinades. At first the salt will draw moisture out of the meat (but the amount is negligible for the juicyness of the meat and the end result), but then it will penetrate the surface and arouse deeper and bigger flavors. be generous with salt when cooking high quality meat. If you are worried about salt in your diet, then the best thing you can do is to avoid prefabricated foods.

The acid in marinades adds flavor, but it also contributes to tenderizing the meat. The acidity should be ph 5 or less, but breaking down meat fibres takes a lot of time and the effect is mostly superficial. Some chefs share a belief that acidic marinades make the meat mealy, rather than tender.

A wine-based marinade should be boiled beforehand, or the alcohol will have a dehydrating effect on the meat. Let it cool before using.

A well stocked kitchen will have produce that contains natural enzymes that break down the fibres that make up protein and meat. Yoghurt, figs, pineapple, kiwi and papaya are som examples of natural tenderizers. The effect of these is usually superficial (especially on a large cut of meat) and, what's more, ceases at high temperatures. A more effective method to make tough meat more tender is to physically beat it.

If you try to grill a cut of meat covered in a thick layer of marinade you will run into a number of problems: (1) Marinade will drip onto the heat source and cause flames and smoke. (2) The marinade, which often includes sugar in one form or another, will burn. (3) You may even have problems getting the right surface on the meat: Inside a thick layer of marinade it will boil, rather than sear.

Do it right: Wipe off excess marinade before grilling over direct heat. You can baste the meat with tasty marinade later, for example over indirect heat.

Oil consists of fat molecules and enhances flavors – but oil in a marinade contributes no flavor and will not penetrate into meat. Skip the oil – and avoid flames and smoke – when marinating before grilling. A water-based marinade is preferable.

If you have applied a dry "rub" you will need to brush away excessive spices before cooking at high temperatures to avoid ashes on the surface of the meat – unless this is an effect you are looking for.

Apart from sour ingredients a marinade can contain almost any seasoning at all. Many spices will taste more and better after being lightly toasted or fried. Heating up the marinade will release more and bigger flavors, but it should be applied cold or at room temperature. Taste the marinade and bring balance to the ingredients while it is warm.