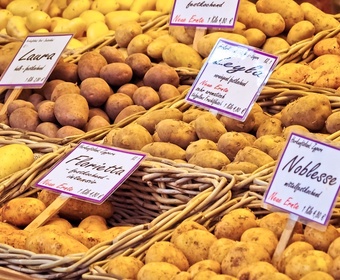 There are hundreds of types of potato but the most important thing is to choose the right category for the dish you are making. And to know what you need to look for in the supermarket.

The first step is choosing between waxy potatoes that stick together when fried or baked and floury potatoes that make a perfect mash. But there’s lots of other options between waxy and floury and varieties that differ depending on where they happen to have been grown. And then there’s Blue Congo that turns your mashed potato a beautiful violet color.

Potatoes all year round

A lower starch content means that waxy potatoes stick together better when heated. They are mostly used for boiling, frying, for potato wedges, for baking in butter and for topping with cheese, as well as in potato salad. But there are chefs who say that waxy potatoes make the best mash too.

Some people say that the waxy sort of potatoes are superior for chips, while others think you can only make perfect chips from floury potatoes. PS the conclusion is that taste is subjective and you can carry on deep frying them until you work it out for yourself.

These potatoes are flourier because they contain more dry matter and starch. They crack and crumble when boiled and are good for mash, purée, riced potatoes and potato balls, as well as to absorb flavors in soups and stews.

… and all the potatoes in between

Felsina, Elina, Matilda, Ofelia, Merlin and Van Gogh are some of the varieties that are counted as medium-floury.

With their soft, buttery flavor, new potatoes are sometimes more a spring side dish than a potato. Enjoy with butter, sea salt and maybe a dash of lemon.

This was the big fast food success of the 1980s, a giant potato, baked in the oven in its own skin. A starch bomb that needs to be floury to be soft and tasty. And now in the 21st century we’ve realized that they cook more quickly and look more appetizing if they’re a bit smaller.