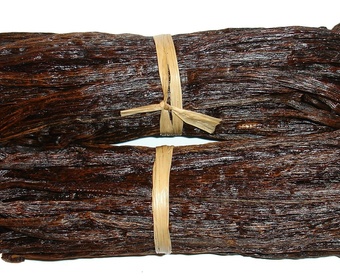 Vanilla is fresh produce. A fresh vanilla pod stored properly from the time it’s harvested until it reaches you is a completely different kettle of fish to the vanilla essence we all have in the pantry.

When choosing a vanilla pod, it basically comes down to personal taste. But avoid the big-name producers who sometimes leave the pods lying around to dry out. Vanilla pods should feel plump and have an intense smell when you take them out of the packaging.

These days Bourbon vanilla pods are also ground into powder, sold in jars. Because the whole pod has been ground, the flavor isn’t as intense as with scraped out vanilla seeds, but the powder works excellently as an emergency solution if you haven’t got a vanilla pod handy. Good to have in the pantry.

Proper custard has very little to do with the instant custard of childhood, and although vanilla is its main flavoring, it has little in common with vanilla yoghurts or other supermarket desserts. Genuine custard is refined luxury.

Don’t throw out the vanilla pod

After you’ve scraped out the inside of the vanilla pod, don’t throw it away. Put it in a food processor whole with one or two tablespoons of sugar. Run the food processor until you have an aromatic vanilla sugar. Keep in an airtight container in the pantry, not for too long.