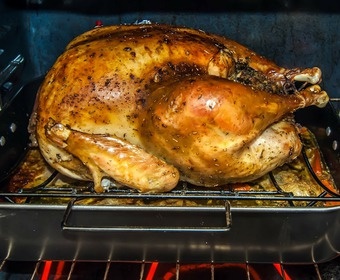 How to oven roast meat

The main advantage when cooking meat in an oven is that the process can take place over a long time period. The protein is heated slowly and it is easy to monitor and control the exact internal temperature of the meat. But don't trust the temperature stated by your oven – trust your thermometer.

High temperatures in the oven will give you a tasty crust and make cooking time short. But there is also a risk that the outer parts of the cut of meat will be overcooked before the heat even reaches the center. Low temperatures in the oven will give you a nice and even result throughout the meat, but not a toasted and tasty crust. That's why combining a period of high heat at the beginning followed by a longer period of low heat is a good technique.

Cooking meat slowly in the oven retains moisture in the meat. The finished steak is pink from one end to another, not grey around the edges and raw in the middle.

If the rate of cooking is rapid, turn down the oven temperature to 55 or 60°C (= "well done") so that you don't risk overcooking anything.

Charts with internal temperatures give you an idea when the meat is just the way you want it. However, when you take a cut of meat out of the oven it continues to cook. Residual heat in the outer, warmer layers continues to spread towards the center. This is why you have to take the meat from the heat before the actual temperature on your chart.

A rule of thumb is that the temperature in the core will increase by 4 percent. An example:

A cut of meat that you want to reach an internal temperature of 54°C and that is cooking in an oven at 100°C should be removed when the thermometer shows 50°C. (Four percent of 100 degrees is four degrees, therefore the internal temperature can be expected to rise from 50°C to 54°C.)

The meat needs to rest for 10 to 15 minutes to give the heat time to spread evenly.

The meat is not supposed to go all the way in there in the heat, you want to "rest it up". Otherwise it will end up several degrees over and be dry.
– William Ahlberg, Taverna Brillo

Chicken in the oven

Be extra careful with temperatures when roasting chicken. A whole chicken is ready to eat when the liquid that comes out of the thickest part is transparent and when the joints "give" if you pull at the legs.

Meat that is not naturally tender develops delicious texture. For example, ox cheeks can be brought to an internal temperature of 80 to 90°C and allowed to cook for anything from 2 to 24 hours.

In professional kitchens one method is to cook meat sous vide over night to get a perfect result. But if you lack sous vide equipment (vacuum + water bath) you can, according to sous chef and meat specialist Micke Björkman at restaurant DeVille in Stockholm, do like this:

Put your oven on your desired temperature, put the meat, for example veal brisket, in a pot and just cover it with water and spices. Leave it over night. The following day you should be able to use your fingers to see if the delicious meat falls apart at your touch.

In an oven the meat is cooked by contact heat – through air – as well as radiating heat from the heating elements. Hot air cooks the meat slower than hot water because air is lighter and has a lower capacity for carrying and transmitting heat. On the other hand, the air in an oven can be heated to far above the boiling point of water.

Fans in the oven will increase the heating effect on the surface of the meat. To avoid the outer layers burning and going dry, lower the temperature suggested by a recipe by 15 to 30°C.