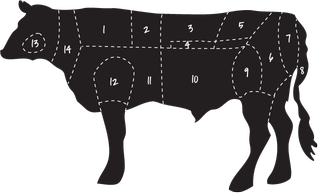 Beef - a meat for all seasons

Humans have been eating beef since pre-historic times. Argentinians eat more beef per person than anyone else on the planet, each wolfing down almost 55 kg a year. Luxembourgers, Australians and Americans closely follow them. One single animal provides a large number of different cuts, each with many different characteristics. What you need to bear in mind when you choose and cook beef is:

This can be tricky to achieve with beef. Every part of the animal can be seen as a delicacy, as long as it is treated in the right way. You transform muscles that have worked a lot, with a lot of cartilage and connecting tissue, to tasty delicacies by cooking them at a low temperature over a long period. More refined parts are the most delicious using the opposite approach.

Fine parts are sensitive. They often become – especially if the piece of meat lacks interspersed fat – too dry. Vice versa – if the meat has not reached the desired temperature – it can taste raw and be difficult to cut. The temperature span between the two is narrow, between 48°C and 65°C.


If you visit meat restaurants in different countries you will discover that opinion varies about what is the “correct” temperature ­–­ it’s a flexible truth. In Sweden, for example, 55°C often corresponds with “medium-rare”. In Australia, for example, the number would probably be 45°C – a difference of 10°C!

This excellent description of beef comes from restaurant AG in Stockholm

Meat from beef should tenderize for at least two weeks. Tenderizing by hanging for up to two weeks produces the best result, but due to the time it takes and the fact the process makes the meat lose weight, the cost per piece goes up. In many stores, you will mostly get vacuum-tenderized meat, which has not suffered any loss of weight. The quality can be just as good, but the difference in taste can be substantial.

A hint when you purchase meat is to buy less, but better quality. You will enjoy the taste more eating beef that has been tenderized by hanging, even though it has lost more water than meat has been vacuum tenderized.

Perfect beef is about opinion and taste. Expect different truths from different meat chefs, but the following is a starting point:

The fatter the better

Interspersed fat (”marbling”) makes the meat more delicious and juicier. The fat on the outside also contributes to the taste, cut it off after cooking or on the plate.

Australia, Brazil, the United States and India are the world’s largest producers of beef for consumption rather than milk production, although the latter has the lowest per capita consumption. Argentina, Ireland, Russia, Uruguay and New Zealand are also major exporters. The most popular breeds are Hereford, Angus, Sebu, Limousin, Charolais, etc.

Beef is usually divided into primal cuts, which differ from one country to another. For instance, there are 35 differentiations between the way the French and the English prefer to cut beef, while Koreans cut their beef in 120 different ways. So it is no wonder that in very many countries butchers are considered to be true trade professionals, with butcher stores being passed on from one generation to another.