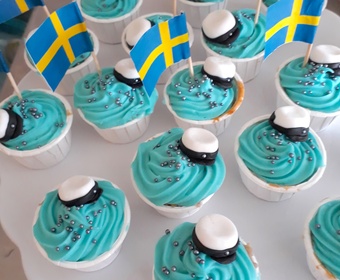 The difference between muffins and cupcakes

Debate rages on all the internet baking forums and the professionals can’t agree at all, but here at least is an attempt to pin down the difference between these popular bakes once and for all.

A cupcake is a miniature cake

As its name suggests, a cupcake is in principle a portion-sized cake. It is basically a cake baked in a cup. A muffin is a relatively nutritious, less celebratory and literally drier creation.

Many muffins recipes could be used just as well as the base for a cupcake, but the latter should ideally be smaller and airier than a muffin. Some people think you ought to be able to gulp them down in one go.

As far as purists are concerned, cupcakes should always have icing (frosting) or some other decorative, sugary topping. Muffins come just as they are. Partly because of this, cupcakes have a pointier shape – if the baker has got it right, that is.

To add extra flavor and boost texture, many cupcakes have a filling, such as vanilla or chocolate buttercream. Muffins, being on the more conservative side, might contain berries, e.g. blueberries, tops.

Muffins have a past as a quick, mini version of bread, not as a kind of cake. The more fat, egg and sugar in the recipe, the more you’re in the realm of cupcakes.

Muffins can be dinner

Muffins can be filling and contain wholegrain flours and flavors from the “salty side”. Chefs make a distinction between “sweet kitchen” and “savory kitchen” and this is the latter. Muffins and bacon is not an unusual combination.

Muffins can be hot

Muffins are at their best and fluffiest when they’re eaten fresh and slightly warm. This doesn’t work with the icing on cupcakes at all. It melts.

In the UK, muffins are round and flat, contain yeast, and are eaten hot with butter, like crumpets. In America these are called “English muffins” to distinguish them from the muffins that are more like cake. The American type of muffins have now made it to the UK as well but it’s usually easy enough to tell which sort people are talking about.