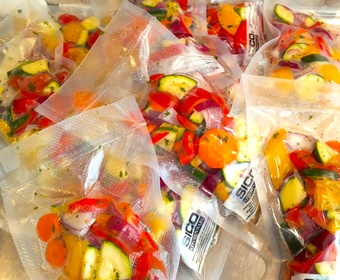 Everybody’s talking about sous vide. The name means ”under vacuum” in French and should be pronounced something like ”zoo vidd”. The method was perfected in professional kitchens way back in the seventies, but due to more affordable and less bulky equipment, it is now becoming more and more common in home kitchens.

Sous vide is anything but difficult

There is a mistaken belief that sous vide is something difficult that only semi-pros can handle in their home kitchens. This is completely wrong. Sous vide is a foolproof way for anyone to get a perfect result, not least with sensitive proteins such as fillet of beef/tenderloin.

You can’t do it without the right equipment and it takes time, but what you end up pulling out of the water bath is a juicy tenderloin cooked to exactly 54°C (129°F) in its entirety (or whatever temperature you have programmed for the water bath). It is practically impossible to achieve something similar with just a frying pan and an oven, no matter how skilled the chef.

Vacuum is good for more

Being able to vacuum-seal plastic bags is also a great way to prolong the shelf-life of food. Food that has been vacuum-packed can last for up to twice as long in the fridge. Keep this in mind when considering how much to invest in what equipment.

What to cook sous vide

If you make an effort you can cook most foods with this method:

First of all the sous vide technique is all about cooking (coagulating) proteins to perfection. But you can do more with the equipment, and there are some things you should know:

Sous vide cooking takes place at low temperatures, for example 45 to 65° C (113 to 149°F) when proteins coagulate (cook). Therefore you have to avoid certain fresh herbs like laurel, rosemary, sage and raw garlic that need higher temperatures to develop the flavors and textures desired in food.

Add the herbs and garlic after cooking sous vide – for example when searing a tasty surface in a frying pan. Or serve them on the side. Or use dried, ground herbs and spices.

Beer, wine and spirits are often used in marinades. When applying more ordinary techniques the alcohol will evaporate as the food cooks, but this is not the case with sous vide. Apart from alcohol in your food you might get unwanted, sharp flavors on your plate.

One recommendation is to cook and boil off the alcohol when making your marinade, before it goes into the vacuum bag with the food. Or: Pour away the marinade and dry the food before placing it in the bag.

How much food at a time?

This depends on your equipment. The original, professional idea was to be able to serve hundreds of perfectly cooked portions – for example, tender fish – in one sitting. More important in your kitchen:

Can you cook everything at once sous vide?

You could pour your whole meal into one bag, but doing so is not a good idea. The point of sous vide is to subject food to exactly the right temperature, but meat, fish, root vegetables, rice, and more, all have different optimal cooking temperatures.

One way around this would be to pre-cook the vegetables before putting them in a bag with the meat, but then you have kind of missed the whole point with this technique.

You can use sous vide as a way of slow cooking. Fill a bag with all the ingredients that you would, for example, normally add to a stew and leave it in the water bath at a relatively high temperature, like 85°C (185°F). Leave the bag in for a long time – past the time when everything inside it has reached the same temperature as the water. After a while the food starts breaking down the way it would do in a slow cooker.

Be aware that all fluids will stay in the bag (not evaporate the way they do in a pot). You need to reduce the amount of fluids in the slow cooking recipe.

Vacuum is a must

If all of the air has not been sucked out of the vacuum bag it will float on the surface in the water bath. This will result in uneven and ineffective cooking. The ability of the water to transfer heat into the food is reduced when pockets of air have an isolating effect.

A common and related problem in sous vide bags is caused by some vegetables, not least kale and cabbage. When cooked, these greens tend to release gases that form floating pockets. A somewhat complicated solution is to, in the middle of the cooking process, empty out the air/gases with a clean knife cut and to vacuum-seal the bag again.

Speed up your sous vide:

Filling your pot or water oven with hot water from the tap will shorten the time it takes for the water bath to reach the right temperature.

Use the flavors in the bag

Traditional cooking in an oven often results in “gravy” in the baking dish, consisting of juices from the combined ingredients. This is often used to make a rich, tasty sauce.

With the sous vide method you have to do this in a roundabout way. After searing an appetizing, tasty surface on the protein you can add the juices from the bag to the pan and reduce it to a base for a great sauce.

Food that profits from sous vide

A prime cut of light, lean pork is delicious – but it also dries out easily. With the sous vide method a pork fillet can easily be cooked to juicy, light pink perfection at, for example, 68°C (154°F) with no risk of the meat drying out. Try marinating the meat in brine before cooking and searing a tasty surface – with a minimum of heat penetration – after cooking.

If you have ever been truly impressed by a perfectly cooked, juicy chicken breast in a restaurant, it was probably cooked sous vide. The slow cooking method stops the sensitive, white meat from contracting and squeezing out the juiciness. Marinating in brine before cooking is a great idea.

Veal, not unlike pork and chicken breast, is lean and sensitive and dries out quickly as soon as temperatures go up. Fillets and steaks can be cooked to absolute perfection with the sous vide method.

A cut of prime, red meat also profits from being cooked sous vide. Even a large steak (in this case a generous cut without bone) can be cooked to perfection from the surface to the core. If you want, you can go as low as 55 to 60°C (131 to 140°F) and leave the steak in the water bath for as long as two days.

Be aware that the fat found in red meat provides lots of flavor if heated to a temperature where it melts, but it is not tasty in its original form. That’s why fine, marbled cuts are not as suitable for the sous vide method at low temperatures. (But you can raise the heat a little, see Sous vide – slow cooking above.)

A hamburger made from prime, newly ground beef should have a pink core. Woith the sous vide method you can cook a flawless medium rare patty. Round off with a quick, superficial sear in the frying pan.

Professional chefs agree (for once…) that the core of perfectly cooked white fish should look like mother of pearl. But when it comes to salmon, there is some disagreement whether it should have a “transparent” character or not (the slower you cook it sous vide, the more transparent it will turn out even when cooked through). With a sous vide you can experiment until you find exactly the degree of doneness you want. Somewhere just below 50°C (122°F) is a good place to start.

Steaks, fillets, and breast from game turn out great when cooked with this gentle method. It brings out the deep flavors in the special character of the meat (coarse muscle fibers).

A small warning: The finest fillets of game, for example from roe deer, can develop a “mushy” texture if cooked at a temperature that is too low. In this case it might be a better idea to skip the sous vide and to go for a few minutes in a very hot skillet instead. Let the residual heat do the rest and cut in thin slices – with an almost raw core – before serving.

Useful to know about protein

Protein that is cooked very slowly and carefully – like in a sous vide – is not subjected to ”shock” in the same way as in, for example, a frying pan. The meat does not contract as much and the juices are not forced out of the fibers to the same degree. Therefore the final result can have a somewhat different appearance when cooking sous vide:

A big advantage when cooking greens sous vide is that the mild flavors are conserved and concentrated. When boiling them, for example, a lot of flavor is lost to the surrounding water.

In a monitored water bath you can cook the white and the yellow to exactly the degree that you want. The sous vide dish ”65 degree eggs” (150°F) is a bit of a modern classic.

Ingredients for sauces and desserts often need to be warned up slowly to low and exact temperatures before being whisked into a tasty batter, paste, or dough. A sous vide gives you absolute control.

The origins of the sous vide technique were invented/discovered in 1799 by the inventor Sir Benjamin Thompson. In 1960 the food industry started using the technique for preserving food.

In the seventies the technique was developed further by Georges Pralus at the French restaurant Troisgros. He reputedly used it for goose liver paté – foie gras – because he thought it developed a better shape, texture, and flavor when subjected to even temperatures in a water bath.

Bruno Goussault, another Frenchman, took it even further by making detailed charts over ingredients and their respective times and temperatures when cooking sous vide.

Today molecular chef Heston Blumenthal (Michelin awarded The Fat Duck in Berkshire, England), among others, is an advocate of sous vide.