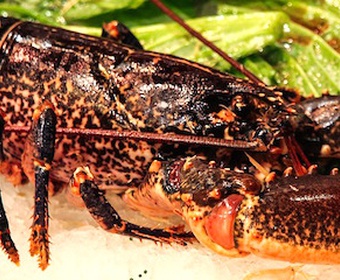 The art of boiling lobster

The basic rule with this fantastic ingredient is not to over-complicate things. Too little cooking is better than too much.

If you are cooking your lobster in water, it should be about the same saltiness as the sea, 3.5% or about 1.5 tbsp salt per liter of water. “As salty as the sea”.

A lobster should be put quickly into the boiling water, claws first. Estimate one minute per 100g and preferably simmer slightly on the low side of that.

Professionals use a water bath/ice straight after boiling to control the course of events when boiling lobster. The cooking process is stopped at the exact time to give the meat the right al dente consistency all the way through.

If you do it carefully, without reaching boiling point, reheating precooked lobster is fine. You can also fry or grill it hot, for example in butter seasoned with garlic, with the cut surface against the pan or the grill.

Leave in the liquid

Leave the lobster to cool in the liquid. When serving, slice it in two lengthwise and remove the grain sac from the head and the intestines from the body.

Cover the lobster with the cooking liquid if you are going to freeze it.

Lobster – like fish – should always be cooked to a point that could be said to be equivalent to "medium rare" for meat. Start timing from when the liquid starts simmering again – too little cooking is better than too much: