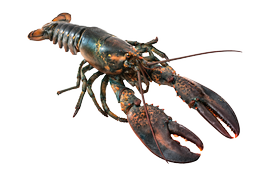 A lobster has wide, powerful claws. Lobsters are a blue-black color when taken from the bottom of the sea and turn a beautiful red only once they are cooked. A lobster that weighs just over a kilo will usually be about 5 years old.

Many chefs think that lobster caught in the North Sea taste better than their close relations from the other side of the Atlantic. Whether this is down to real differences in flavor or patriotism is hard to say.

How to cook lobster

There should be room for the whole lobster in the boiling water. It needs to go in claws and head first.

Boiled lobster should ideally cool in its own liquid. Cook in clean, fresh sea water if you can. One and a half tablespoons of salt in one liter of water is equivalent to sea water.

Approximate cooking times (too little cooking is better than too much):

How to boil lobster.

It’s a waste not to make stock out of the lobster shell. Roast it first to bring out more flavor. The sauce you make from the stock from spiny lobster or lobster is ideal for mild-tasting, poached fish.

Boiled lobster. The salt in the cooking water is enough to add flavor but some add sugar, beer, dill, etc. Serve with melted butter and an attractive garnish.

Due to regulated fishing, the future for many lobster populations in the world looks positive. It may even be the case that the pressure on the American lobster population suddenly abated with the stock market crash in 2008…