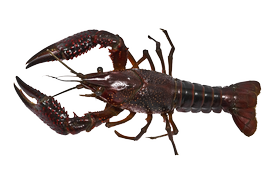 The original freshwater crayfish has become a rare, expensive and sought-after delicacy due to crayfish plague. A European crayfish can live to the age of 20 and grow to 20 centimeters long.

European crayfish do not have the characteristic light mark at the base of the “thumb” of the signal crayfish. It is spikier, darker and has thinner claws than its American relative. The way crayfish go red when cooked is because all the pigments apart from the red are broken down by the heat.

How to cook crayfish

Your crayfish should all be alive when you start.

If you’re cooking Scandinavian style, the crown dill in the cooking liquid should have formed seed pods to get the right flavor. Cut the stalks off.

Louisiana style: Add the ingredients according to how long they need to boil. Spices ("Cajun boil seasoning") and chunky vegetables first, your smoky sausage last. And after that the crayfish – they sould only simmer for about five minutes.

Sort the crayfish by size before boiling them in – as a rough idea – three batches. Start with the largest and finish with the smallest.

Make sure the water is boiling properly. Put the first 10 to 20 crayfish in, put the lid on and wait until it boils again before putting in the next batch. After the last batch – once the water has come back to the boil – the crayfish should cook at a lower temperature for about 5 minutes.

Cool down the liquid as quickly as you can once you are done.

The meat in freshwater crayfish doesn’t have much flavor. Boiled crayfish should sit in their own liquid for a day or longer to absorb flavor. If they have to be eaten more quickly, increase the amount of salt in the cooking liquid.

Crayfish boiled in water, salt, a few cubes of sugar and plenty of crown dill. Bring the water to the boil slightly early so the dill has time to add flavor.