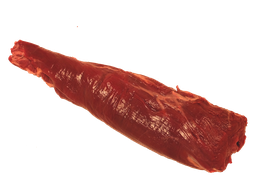 Fillets – cut from the saddle – are thought to be the best cut of a moose. Fillets are cut from the inside of the back and are equivalent to a fillet of beef. Get your cast iron frying pan out and turn up the heat.

A fillet is a tender cut but it’s also very lean. It’s important not to overcook it.

Smaller and finer game fillets shouldn’t be overcooked as the tender meat can take on an almost sticky consistency. Too low a temperature and slow cooking can also bring out a flavor similar to liver, which many people unfortunately associate with game.

Moose has a relatively restrained game flavor. Choose reindeer fillet if you want it more on the wild side.

How to cook moose fillet

Fry the evenly cut fillet whole in a cast iron frying pan. Don’t let it lie in one place in the pan for too long. Turn it frequently so the heat works its way into the meat. Once it has browned slightly, turn off the heat and let the meat reach 55-60°C in the residual heat. Serve in slices cut across the fibers. Don’t over-complicate things. Let the meaty flavors come into their own. Salt, pepper and a sprig of thyme will do the job.

The tenderest cuts of moose – loin and sirloin – taste great char-grilled. This keeps the center raw and juicy. Here’s how: