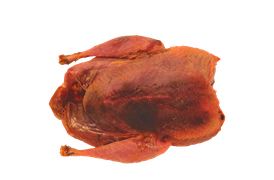 When it's the grouse mating season you'll hear these birds' bubbling call deep in the forest. Grouse eat leaves, berries and insects. In the winter they perch in birch trees and eat buds.

The male weighs up to two kilos and the female about half of that. The male has blue/black plumage, red around the eyes and is white under the tail. The female is greyish brown.

After a winter diet of birch buds, grouse can have a slightly acrid flavor.

Members of the grouse family, like capercaillie, black grouse and ptarmigan have the most gamey flavor of all wild fowl.

The male grouse is bigger than the female but gourmets would say that the females taste better.

One bird can serve to 2 to 4 people depending on its weight.

The meat is dark and has a clearly gamey flavor.

How to cook grouse

Roast grouse whole: Roast the bird in the oven at 170-180°C to an internal temperature of 70°C. Cover the flesh of the meat with fat in one form or other.

Make grouse meatballs: Mince the meat. Use your usual meatballs recipe but mix in a few hundred grams of fatty bacon.

Grouse game burgers with a creamy mushroom sauce and cherries.