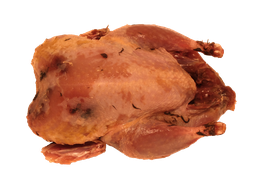 Partridges nest on the ground and prefer to run rather than fly. They tend to live in open arable landscapes, living on seeds, buds and herbs as well as insects and snails.

This round bird has a short tail, rounded wings and a speckled brown and grey plumage. The male has a clear dark mark on its abdomen. The birds weigh just under half a kilo.

Like pheasant, partridge has light meat, but with a much clearer game flavor. The meat is tender and has a fine texture.

Young birds taste better than old ones, which can be skinny and dry. Older birds are best in casseroles. But even then you might need to add some fat, such as lard or bacon.

Estimate one partridge per person.

How to cook partridge

A partridge roasted whole tastes great, either cooked on the grill or in the oven.

Partridge on the grill: Spear the partridge on a skewer. You might be able to fit on two. Grill until the meat juices run clear.

Use a marinade if you want to add more flavor: Don't be afraid of "big" flavors, such as orange, garlic, soya, Madeira, smoked chili and honey. Serve with grilled vegetables – with a bit of marinade too – and potato salad.

Partridge in a sauce of brandy, gravy and cream. Use a fine chicken stock to take the sauce to a whole new level.