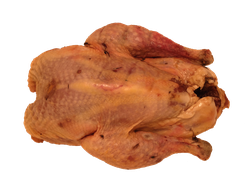 This impressive bird is related to the peacock and is also known as the ring-necked pheasant. They originate in Asia and were introduced to the rest of the world as a game bird.

The cock pheasant is easily recognizable by its beautiful copper-brown color, greenish black throat and red cheek patches. The coloring of the hen, the female, is more subtle. It eats everything from seeds, leaves and fruit to small animals and worms.

Pheasant meat is relatively easy to handle for beginners at cooking wild fowl. The light meat has a mild flavor that works well slow cooked.

The male can weigh up to two kilos and is bigger than the female, but gourmets say that the meat of the female has a better flavor.

You'll get about 4 portions from one pheasant.

The meat is light and similar to chicken.

How to cook pheasant

Make a stew and the meat will be wonderfully tender: Take out the pheasant. Chop onion and garlic and dice carrot and celeriac. Brown the whole pheasant with spicy sausages in a cast iron casserole dish. Add the vegetables, white wine, tomatoes and spices and simmer for an hour on a low heat, first with a lid and then without. Add beans, leek and lemon zest and simmer for 5 minutes.

Roast the pheasant whole in the oven: Cook at 170-180°C to an internal temperature of 70°C. Estimate about an hour. Cover the flesh of the meat with fat in one form or other.