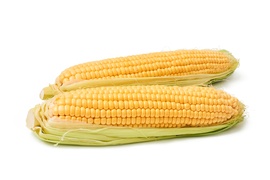 Just like globe artichokes, sweetcorn is an impressive plant. Sweetcorn cobs develop after pollination and one cob can contain several hundred pieces of corn. In Mexican cooking sweetcorn turns up as flour in tortillas and tacos, while in Italy they eat coarsely ground sweetcorn or maize, better known as polenta.

Sweetcorn is one of the vegetables that quickly loses its crunch and flavor after harvesting. Deep frozen sweetcorn can be a better choice than fresh corn on the cob that has sat in a supermarket for a while. Tinned sweetcorn, however, is rarely a fun option.

One good tip is to buy in a decent stock of freshly harvested sweetcorn when it’s in season. Boil it quickly, cool it down and freeze and you’ll have good sweetcorn all winter.

The individual pieces of corn should sit plump and tightly packed. When they start to shrink and crumple, the sweetcorn is old.

Always keep it in the fridge. At room temperature the sugar in the sweetcorn turns to starch much more quickly, and when that happens, the sweetcorn tastes tough.

Keep the leaves on the cobs and they’ll keep longer in the fridge.

Have you bought too much sweetcorn? Boil them quickly, cool them down and freeze, or cut off the pieces of corn first before freezing.

Remove the leaves and the hairy part that surrounds the cob.

To cut the corn off the cob, cut off the ends and stand the cobs on their end. Then all you have to do is slice them off with a sharp knife.

How to cook sweetcorn

Sweetcorn is a mild tasting vegetable. Don’t be afraid of adding flavor with butter, salt and/or a slightly browned surface.

At the start of the sweetcorn season, boiled sweetcorn with butter is all you need. Then you can switch to grilling it, try flavored butter, make sweetcorn soup or fry sweetcorn fritters. You can also eat sweetcorn raw or fried in salads.

Boil the corn cobs in lightly salted water for about 7 minutes. Put them on a cloth to let the steam out.

Make a flavored butter to go with boiled corn on the cob. A few suggestions:

A sweetcorn soup is creamy and warming. Fry a teaspoon of garam masala with the onions for an Indian touch.

Grilled sweetcorn has a little more character. Place the cobs raw on the grill or cook them quickly before brushing them with oil and giving them a golden brown grilled surface.

Sweetcorn fritters make a good vegetarian lunch or a filling side dish. Spinach and crème fraîche add flavor to the batter.

Attractive yellow sweetcorn brightens up most dishes, a slow-cooked chili, for example.

If you’re boiling corn on the cob, stack them in a generous pile. It looks attractive.

A small chunk of grilled corn on the cob – about a third of a whole cob – adds character to a barbecue.

Freshly harvested boiled corn on the cob with butter and sea salt.