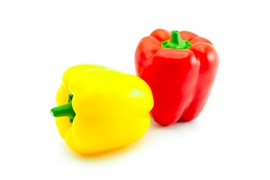 This colorful fruit changes color as it ripens. First it’s green, then yellow, then orange and finally red. When it’s red and green it contains high amounts of vitamin C.

Recently pointier varieties have been gaining in popularity over the square sort. As well as being longer, they have thinner skins and more flavor.

A ripe pepper has a smooth surface and feels springy. Unfortunately, the shining, “perfect” examples you find in supermarkets tend to have been grown for their appearance rather than their flavor.

Try to find organically grown peppers because conventionally grown ones tend to have been sprayed. Organic ones can have more flavor – if you’re lucky.

With a bit of good fortune, you can come across Turkish peppers that are long, light green and have a slightly stronger flavor.

One tip when choosing peppers is to use your nose more than your eyes. Uglier examples with dry “scars” on the shining surface don’t look as good but they might have more flavor. Sniff!

It’s best to keep peppers in the original packaging. The material and the design will have been produced to keep the contents fresh for as long as possible.

If the peppers don’t have any packaging, put them in a plastic bag in a cool place and they will keep for up to a week.

Distinguish between root vegetables and other vegetables: Green leaves and vegetables that grow above ground use up their water reserves and their nutrients much more quickly than root vegetables, which can be said to hibernate. Store them in different drawers of the fridge.

Rinse the pepper and dry it well with a cloth.

When cooking it, remove the seeds and the white membrane inside. If you want to keep the pepper’s shape, cut a “hat” round the stalk. Most of the seeds will come too when you remove the stalk and the rest can be picked out with your fingers.

How to cook peppers

Pepper is very versatile, especially thanks to its color. Eat it raw, thinly shredded in salad or sliced horizontally into rings. The slightly sweet, full flavor works well in stir fries and casseroles and is even more intense if grilled or oven baked.

Braising peppers: Slice the pepper in equal sized pieces (smaller ones can be braised whole) and brown in butter and/or oil. This draws out the flavor and sweetness. Add a little liquid – for example water, stock, beer – and reduce until the pepper is done. It should retain its texture and chewiness.

Roast pepper: Halve and de-seed the peppers. Place in a roasting tin and roast at 250°C until they are charred with blisters on the skin. Leave in a plastic bag for a moment once they have cooled and it will be easier to remove the skin.

Marinate roasted pepper in oil and vinegar with garlic and herbs, for example.

Use roasted pepper for a milder pepper flavor in a gazpacho, the classic cold tomato and pepper soup.

Pepper is a guaranteed ingredient in stir fries. Mix different colors for the most attractive effect. Slice lengthwise or cut into smaller pieces and throw in.

Grilled pepper doesn’t need to be grilled all the way through to taste good, it can have a bit of its bounce left. Brush with oil, give it some attractive stripes on the grill and serve with sea salt.

Stuffed pepper is a classic. Cut the pepper in halves or cut off the lid, remove the seeds and inner walls and stuff the pepper with rice, mince, feta and fresh herbs. Bake in the oven and eat as a main dish or side.

Pickled pepper: Remove the seeds and inner walls and halve the pepper lengthwise or cut into smaller pieces. Bring a 1-2-3 solution to the boil and pour it over the peppers in a clean jar while still warm. Take it out when you need a crisp, sweet and sour side dish.

Turkish pepper can be fried in oil until properly brown and served as a snack with olive oil, a splash of vinegar and sea salt.

It’s never difficult to serve pepper so that it looks attractive. If you’re cooking pepper in a way that causes it to lose color, save some of the raw pepper and sprinkle over the top when serving.

Ajvar, a highly flavored pepper dip from the Balkans. Serve this cumin and garlic-flavored kick with anything that needs a bit more attitude.