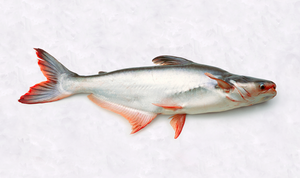 Pangasius, or Iridescent shark, is one of several species of shark catfish. These fish are not sharks, but rather catfish that bear some resemblance to sharks.

Another name used is "Swai", but this is actually a close relative, not the same fish.

Iridescent shark is a popular fish for eating and lives in rivers and is farmed in the US and especially in Asia.

You might also find it under the name “Panga”, “Basa”, “River  Cobbler” and variants on “catfish”. The misleading name “Vietnamese sole” is also found. It's all very confusing...

How to cook pangasius/iridescent shark

The fillet is flat and the flesh is white. The flavor is similar to cod, but the texture is much firmer. It has a “fatty” taste and is well suited to breadcrumbs or batter.

Red, as farming this fish has major environmental impacts.