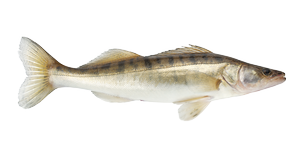 Also known as zander, pike-perch is similar to a long and thin perch, but tends to be darker in color with a clear lateral line and without the red fins. The top side is dark. A pike-perch can weigh up to 15 kg but fish weighing up to 3 kg are most common, whether on the end of a rod or at the fishmongers.

Small pike-perch can look like a little colorless perch. In the kitchen this isn’t really a problem as both are excellent eating and can be cooked in roughly the same way.

Pike-perch is one of the tastiest, flavor-packed freshwater fish there is. The flesh is white, firm and lean and can be combined with many different spices and accompaniments. The flesh can take plenty of salt and can be used in the vast majority of fish recipes.

Smaller fish can be cooked whole, while fillets can be used for practically anything.

Because pike-perch flesh is lean, it keeps longer in the fridge or freezer than fattier fish. The firm flesh is excellent for soups and also works in a wok if you aren’t too overenthusiastic with the spatula.

Curing is a preparation method that works less well for pike-perch as the lean flesh tends to get too dry and too hard.

Pike-perch is thought to taste best in autumn and winter when it’s migrating to deeper water.

Pike-perch baked in salt. Make a thick coating of coarse salt and egg white. Cover the pike-perch with the coating and bake in the oven.