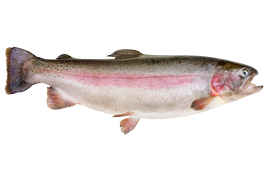 A fish in the salmon family that original comes from the US Pacific coast. It can be recognized by a rainbow-colored band on the sides. Farmed rainbow trout rarely weigh more than 5 kg, fish weighing around a kilo are most common.

The flesh varies in appearance from pink to almost white. The flavor can vary too. The rainbow trout you find at the fishmongers will be farmed. The rainbow trout sometimes caught on the coast is trout that has escaped from fish farms.

This fish with firm, red flesh can be cooked in the same way as North Atlantic salmon, but it is common for it to be cooked whole with the skin on, either poached or baked in the oven. In its homeland of the US it is often eaten as a topping on a cream cheese bagel.

The color of the fish can be accentuated by adding beetroot, for example, when curing it. The firm flesh works well minced. Mix it with white fish.

Spinach goes well, and also adds color to the plate.

One hot tip is a Mexican ceviche from the more southern areas from which rainbow trout originates. Mix finely sliced rainbow trout, fresh red chili and fresh coriander together. Cover with freshly squeezed lime juice and salt well. Leave for one or two hours, giving it a gentle stir from time to time. The fish is cooked when the flesh has gone paler, is no longer transparent and has the right amount of chewiness in the mouth.