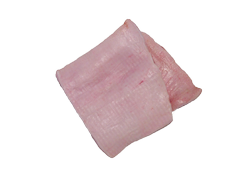 Lard comes from the white fat deposits found in pigs. The fat from the back is quite solid and butchered and sold in chunks. Fat from the pigs abdomen is softer. It is often melted and strained to achieve a smooth, buttery consistency suitable for cooking and as a spread on bread.

Lard consists of about 40 percent saturated fat, which is why it has been considered unhealthy. But attitudes towards these kinds of fats are changing drastically. Lard actually contains less saturated fat, more unsaturated fat and less cholesterol than butter.

The grease that collects on the bottom of an oven dish when cooking a fatty cut of pork consists of lard. Save it for your cooking. (Remember that fat from bacon is something else, it has been seasoned with smoke.)

The taste of lard is very mild, almost neutral.

How to cook lard

Fry and deep fry in lard. It can take high temperatures and is easy to handle in a hot skillet. You won’t risk the taste of burnt butter and your food – for example chicken with the skin still on it – turns crisp and tasty on the outside. Lard is suitable for deep frying for the same reasons, it is not smoky and puts a lovely crisp on your food.

Add lard to lean meat, poultry and game to make it tastier. Insert strips of lard into the meat to compensate for absence of marbling. There are “needles” designed for this purpose. Lean meat in, for example, a steak can be covered with thin layers of lard kept in place with string.

Lard is a common ingredient in pâtés and foie gras. The fat itself can also be salted, spiced up or seasoned with smoke to become a cured product in its own right.

Lard is used in pastry and cookies instead of other forms of fat. Replace about half of the butter to make – for example – tastier, fluffier shortcrust pastry for pies.

Boil delicious meats in lard to make confit. It works just as well as fat from duck, but the taste is a little different, reminiscent of sesame.

Traditional pastries for pies, pierogi, tamales, empanadas, etc, are all made with lard.