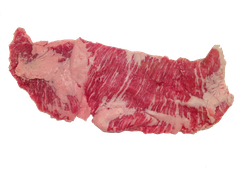 A thin cut of meat hidden on the side of the thick neck, between the shoulder blade and the loin an Iberian pig. A direct translation of the name is Iberian Secret, "Iberico" being the name of Spains most exclusive breed of black – "Pata negra" – pigs. This cut is marbled and imbedded in fat. No other cut on a pig – Iberian or not – is more juicy and tender.

In Extremadura and Andalucia in Spain the Secreto Iberico is considered a delicacy – in fact, the best cut on the entire pig. Genuine Secreto Iberico never comes cheap. The same cut on any other breed of pig will also cost you – there are only two on a pig. The size of the cut varies depending on pig breed.

How to cook Secreto Iberico

Don't complicate things. The best way to cook Iberian Secrets is to simply fry it in a hot griddle or or grill i over direct heat. Treat it the way you would a fine entrecote – but don't forget that cooking takes little time and must not be allowed to go too far. A minute or two of high heat on each side should be enough.

Spanish connoisseurs enjoy Secreto Iberico medium rare. The updated, recommended inner temperature for pig meat is 63°C/145°F (USDA). This should give you a good result. Earlier recommendations have been 70-71°C/158-160°F, which means your meat is overcooked and dry. If you want to be on the safe side, gor for 65°C/149°F (scientifically speaking the meat is "safe" at 63°C/145°F).

You don't need any other spice but salt. Maybe a little freshly ground black pepper.

Using rosemary and thyme will give you a Mediterranean touch. A popular Spanish method is to marinate Secreo Iberico in the juice from a grilled and peeled red bell pepper.

You can also apply low heat for a long time, for example using a sous vide set at no more than 60°C/140°F. After a few hours the meat is extremely tender. All you need to do is to sear the Secreto Iberico over high heat for a tasty and aromatic surface before serving. With this technique you can heat up the protein to exactly the right temperature and tenderness.

For that final touch, slice the meat – across the (tender) fibres – before serving. In Spain Secreto Iberico is often served with a wedge of lemon.

Sprinkle salt and a little pepper on both sides and sear quickly over direct heat on the grill. The high fat content should result in a fantastic, trasty crust. The inside should be juicy and tender and very tasty. A glass of Rioja or Ribera del Duero goes beautifully with the light and juicy meat.