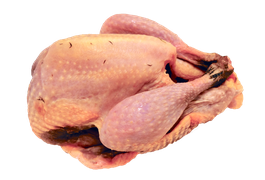 This bird is popular in many parts of Africa, India and in North America. The specimen you might come across in a European store is probably a Helmeted Guineafowl.

The guineafowl resembles chicken in many ways, but the meat is leaner, somewhat darker and more flavorfull. Comparing the meat to game – for example pheasant – is taking it a bit far, but fans of this bird will tell you that it is a delicacy that it tastes “like chicken used to taste”.

It is not expensive, nor is it difficult to prepare, but due to the low fat content you have to be very exact about not taking the degree of doneness too far.

Guineafowl is sometimes called "original fowl" or "guinea hen". It is at its best in the autumn.

How to cook guineafowl

This bird on your chopping has had some time to grow. The bones are hard and the cartilage is a lot tougher than on a broiler chicken, so be careful with that knife.

Do what you ususally do with chicken – but take extra care so that the inner temperature is not allowed to climb above 70° C. Wrap breast fillets in bacon or cured ham to stop them from drying out.

Sweetness: Accompaniments with some sweetness go well with the meat’s slightly gamey character, for example chestnuts, sweet potatoes and other root crops with a little more sugar.

Fat: The meat needs a little help from ingredients rich in fat. Serving it in, or with, a sauce based on full cream is a good idea.

A younger bird can be suitable for the grill or for roasting in the oven. Cover and/or baste it with butter, lard or fat of some kind. An older bird will do better in a casserole that keeps the meat moist.

Eggs from guineafowl pack more taste and richness than ordinary eggs. The shell is hard and removing it can be tricky.

Whole guineafowl in a casserole in the oven. By combining oven heat with a deeper pan and moist ingredients you improve your chances of keeping the meat juicy. Baste the bird often with fat and with its own juices. While the bird is resting, make good use of the gravy in the bottom of the casserole and reduce it to make a great sauce.