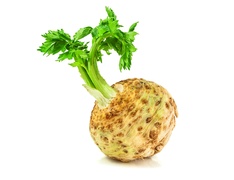 A few years ago celeriac went from being a boring knobbly vegetable often confused with swede to being a trend ingredient on restaurant menus. Celeriac is now often seen as an obvious veggie alternative to meat and fish. It has a flavor that’s deep and fresh at the same time.

Grated, fresh celeriac helps the flavor and juiciness in burgers and meatballs.

How to cook celeriac

Think of celeriac as a flavor enhancer. Small cubes of celeriac add character to bolognese sauce, tomato sauce and soups. However, there’s a risk that the flavor will take over, so don’t use the whole thing unless you’re making a pure celeriac soup.

Make celeriac and potato purée: Boil small pieces of celeriac with potato and purée in a food processor. Don’t be stingy with the butter.

If you find whole, organic celeriac, bake it in the oven as it is. It takes a bit of time but it’s worth every minute. Here’s how:

Tip: Blacken the skin with a blow torch before baking in the oven. It looks good and adds a smoky flavor.

Bake in the oven: Slice celeriac into pieces and oven bake with other root vegetables at approximately 190°C until soft. A little oil and sea salt are all you need to go with it, but thyme or savory are good too.

Roast the peel: Scrub the celeriac well and slice off the peel. Put it in the oven with oil and sea salt. Eat as a snack, maybe with some sour cream and whitefish roe. Or serve it as a side dish.

Oven-baked celeriac is well on its way to becoming a new classic.