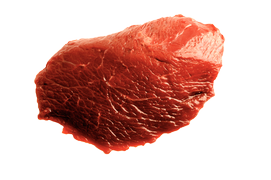 A solid piece of meat, which resembles fillet of beef, but is considerably leaner.

Ostrich fillet has been available for a long time but remains relatively rare in many stores.

A fillet from chicken consists of the muscle that flaps the wings, but the fillet on an ostridge is found on the muscular body.

How to cook ostrich

The tasty, tender, lean meat requires careful handling and added fat in order not to become dull during preparation.

Aim for an inner temperature of about 58°C.