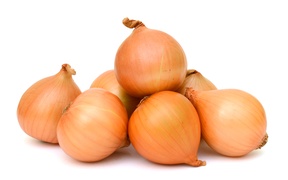 The ordinary yellow sort you find in the supermarket. The flavor is sweet and good, but can be a bit sharp if you don’t cook it. A quick dip in cold water can tone down the flavor a bit.

The best onions in the world are said to come from New Zealand.

Organic onions tend to be slightly smaller – but lots of people think they taste better. Compare for yourself and draw your own conclusions.

How to cook onion

You can do practically anything – or the basis for anything – with onion. Stews, soups, sauces, etc. This is what you can do to bring out the onion flavor in its own right:

Improve it with sugar: It’s the sweetness that makes onions such a useful vegetable, high in flavor. Adding a bit extra boosts the experience even more.

Fry halved: Fry peeled halves of onion golden brown in butter with the cut side down. Add sugar so that the onion caramelizes. Turn the onions over and pour in a splash of vinegar and stock. Bring the liquid to the boil and simmer under a lid until the onions are soft all the way through, basting from time to time. Sprinkle with thyme and serve with pork.

Make onion soup. Fry the onions golden brown – let it take its time – before adding vegetable or chicken stock and blending to create a tasty soup. Don’t be stingy with the pepper. Garnish with toasted, rustic bread and grated mature cheese. Melt the cheese and serve.

Pickled onion: Using the same liquid and recipe as used for Scandinavian-style pickled cucumber but replacing thinly sliced cucumber with shredded onion. The liquid makes the onion taste milder but you still want to use a mild yellow onion if you’re making this.