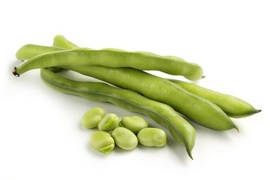 A pulse that grows in pods, that has been cultivated for thousands of years, but that is not as closely related to other peas and beans as its appearance might suggest.

Lima beans, a South American relative, are not the same thing.

Broad beans are resistant to frost and often make an early appearance in spring – and are harvested until October, or even later.

The pods are large and often crooked and blemished, but this says little about the quality of the beans inside. More important is the fullness and weightiness of the pod.

Broad beans can be eaten both fresh and dried. Dried beans must be soaked before cooking.

Fresh broad beans should be eaten as soon as possible after harvest. They will keep for longer if left inside the pod.

Keep the beans in the vegetable compartment in the fridge or in a cool pantry. Inside a paper bag is not a bad idea. Or a plastic bag, to keep them humid and springy.

You only eat the tender beans, not the leathery pod.

If harvested at an early stage, you can eat the entire bean. More mature beans develop an outer skin that you might want to remove (if serving the beans as snacks, with sea salt crystals, the guests themselves can decide whether to remove or eat it). What’s left is a small, pretty, and delicious light green bean.

Opening and emptying pods is a great job if you have young cooks – say, between four and twelve – in your kitchen.

Fresh, recently harvested broad beans need only be removed from the pod and cooked for a few minutes before being eaten just as they are. There is no need to complicate matters with this amazing ingredient.

If the outer shell on the actual bean has grown thick – which is always the case well into the summer and in autumn and with dried beans – then it needs to be peeled after cooking. The technique is a bit like “popping” scalded almonds from their peels.

The summery flavor is generous and the texture is creamy and delicious in salads, stews, and soups.

Broad beans also make great snacks, roasted or boiled and served with a little olive oil and salt. In southern Spain they are traditionally boiled with “hierbabuena” (a variety of fresh mint).

From boiled broad beans you can make a wonderful puré. Unfortunately, the color is a bit bland. And don’t mix for too long or flavor will also be lost.

Broad beans are pretty to look at, nutritious, and relatively rich in proteins. They make vegetarian dishes more satisfying and are a great way to freshen up and add excitement to dishes with meat and fish.

Recently harvested, freshly boiled broad beans are a delicacy. Just add a fistful to any dish to make it more attractive.

Add broad beans – at the end – to vegetarian stews to make them more exciting, for the eyes as well as for the palate.