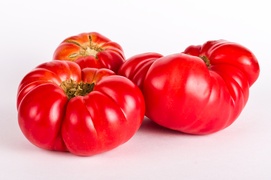 This is a big family of often large and irregular tomatoes that are both red and green even when ripe. They are particularly popular and common in all Mediterranean countries.

The shades of green and yellow are supposed to be there. The reason why common tomatoes don’t have them is because most consumers mistakenly think that what we necessarily want are the regular and fully red kind – but which often come with less taste and a more bland texture.

A variety known as RAF (a sad abbreviation of a name that has to do with resistance to a fungi known as fusarium) is, according to some Spanish growers, one of the finest of them all.

How to cook salad tomatoes

You can boil, fry and bake these tomatoes, but when ripe they are probably best just the way they are. A little salt, oil and vinegar is the only help they need.

Bruschetta. Be generous with the salt, vinegar and oil.